I remember growing up listening to my grandmother’s gramophone. As a child, the sound always enthralled me, it still does.

My grandmother’s 78s were mainly classical music, but she had some jazz and a couple of unique records too. There was Frank Sinatra, Glenn Miller and his hit tune of Moonlight Serenade and a record of that oh so divine voice of Sarah Vaughan. A friend of mine who died a few years ago played tenor horn in the band that supported Sarah Vaughan when she came to Australia in 1965.

The endless fascination of watching that round shellac record spin and hearing the crackling sound underneath the music became a source of inspiration and entertainment for me as a boy; not much has changed. 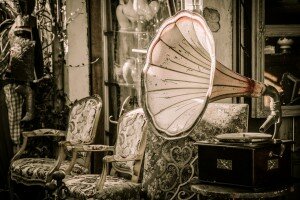 I can’t say there was a lot of warmth to the sound of the gramophone, but the way it conjured music and the spoken voice out of seemingly nothing, just a piece of plastic with a metal needle floating on it made for a world of pure delight to me. Music and plays had me glued to my grandmother’s gramophone every time we visited her. I always rushed to find it and start playing what was on the machine. I’d curl the handle around and out it came, that glorious crackly sound. It didn’t matter what was on the gramophone, it was the sound of invention to me as a boy.

Several records that were in my grandmother’s collection were unknown to me. I discovered sounds that I never knew existed. The music of Latin America with its swaying rhythms, old crooners no one ever hears anymore, movie music and even some early electronic sounds. Every record was a mystery.

I didn’t know much about music in my early days, because recorded music was not something that happened in our house. We had a clock radio that sat atop the fridge and it was almost never switched on.

I remember once in the mid-70s when the radio was actually on in the kitchen and the song Bloody Well Right by Supertramp came on, and my mother, I’d never seen her more horrified. She raced to the radio on top of the fridge and switched it silent while saying, “how can they allow that song to be on the radio?” Then, for my mother, the word bloody was a vile exclamation used by foulmouthed and undignified people.

I escaped into the sounds of the records on that gramophone. It didn’t need electricity, just a few simple turns of the handle and out it came, the sound of another world for me to flee into.

Every time I hear the crackling of a record it takes me back to my youth. However, one of the wonders of modern technology is that we can now relive the sounds of recorded history without the need to go out and buy the equipment of the day. Boston Public Library has a collection of digitised music from wax cylinders, 78s, and LPs. They have hundreds of thousands of audio recordings.

Not one of these recording has had the crackling edited out, thank goodness. The music is historic, but the sound of that crackling is the sound of history. If it was removed, it simply wouldn’t be the same.

In painting, there’s a saying that goes like this, it’s the blemishes and the dark spots that go to make up the whole. So is the case with that constant crackle on records. Almost all the music we hear today has been manipulated to death. When I compare my records to my CDs or an MP3, there is no comparison. I don’t know where the idea for perfect noise-free music came from, but MP3s and CDs have killed the enjoyment of music for me.

If you go to a concert, you hear all sorts of sounds; orchestras tuning up, the jacks on a harpsichord falling down and even clicks on a clarinet can be heard at times. These are normal things. The filtering of all connected sounds in digital recordings has made them sound like they were not made by humans.

Some of my favourite recordings come from live performances. And it’s the mood of the sound and all the small associated things that go into a live recording that makes you feel like you are there at that performance. Just like the crackle on a 78 record makes you feel closer and more connected to the music.

If you’ve been lucky enough to retain or get a collection of 78s, you can find a selection of modern record players that will take a 78 record. I’m getting one soon. Then the sounds of my youth and the memory of my grandmother can be brought back to life.