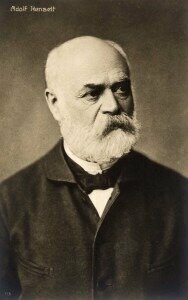 In 1836, the exceptional pianist and composer Adolf von Henselt suffered a severe nervous breakdown. After taking a number of cures in local spas and private hospitals, Henselt decided to visit his old teacher Johann Nepomuk Hummel in Weimar. Hummel was delighted and invited Henselt to stay for a couple of months. Still worried about Henselt’s health, Hummel arranged for a meeting with the royal physician to the court. Dr. Vogel was in charge of the wellbeing of Grand Duke Karl August, and he also took care of Johann Wolfgang von Goethe. He now counted Henselt among his patients, and once the pianist restarted his performing activities in small private settings, Dr. Vogel and his wife Rosalie were frequently on the guest list.

Rosalie Vogel, née Manger hailed from a middle-class family in Breslau. She had wed Dr. Vogel at an early age, and had borne him 4 children. Taking care of her family, Rosalie had comfortably settled into a life of domestic anonymity. All that dramatically changed when she saw and heard Henselt play the piano. The two sets of Henselt Etudes Op. 2 and 5 attracted a lot of attention from pianists and audiences far and wide. These perfect little concert miniatures, full of poetic content and glorious melodies, take their inspiration from German folksongs. It is not surprising that various commentators called Henselt “the most German of composers, with the Fatherland as his keyboard.” Despite their apparent simplicity, these studies are studded with extreme technical difficulties.

To this day, they remain beyond the capabilities of many pianists. Even the legendary Anton Rubinstein had to admit defeat. After working on the Etudes for a few days, he realized, “it was a waste of time, for they are based on an abnormal formation of the hand.”

But there was nothing wrong with Henselt’s hand, which was described “of average size with thick fingers.” Like a hermit, Henselt had simply locked himself away for 2 full years, acquiring a unique piano technique and a nervous breakdown in the process. Although, or because Rosalie was significantly older than him, he fell in love with her gently calm and nurturing presence, qualities he instinctively longed for. With Rosalie married and Henselt receiving an invitation from the Grand Duchess Maria-Pavlovna to tour Russia, the lovers had to make a decision. Both quickly understood that life would be miserable without each other, so Rosalie filed for divorce. Dr. Vogel, as might be imagined, was not impressed. He went to great legal lengths to prevent his wife from leaving, even using the children as pawns in the struggle. In the end, Rosalie had to leave her children behind, and Henselt married Rosalie on 24 October 1837 at Bad Salzbrunn, Silesia, currently Poland. The marriage certificate classified her as “a widow,” attesting to the fact that her divorce from Dr. Vogel had not yet been affected. Eventually, the divorce was granted and Dr. Vogel married a dreadful woman who took great pleasure in making the life of her stepchildren a veritable nightmare.

While Henselt busied himself with an increasing number of administrative duties in Russia, Rosalie gave birth to their son Alexander. By 1860 the entire family had been granted Russian citizenship and Alexander joined the Russian army. The family prospered financially and purchased a large estate near his wife’s ancestral land in Silesia. However, the unexpected death of their son in 1878 from pneumonia came as a big shock, and Rosalie would suffer a serious stroke just a couple of years later. She was unable to speak, walk or write, but Henselt gradually nursed his wife back to reasonable health. Henselt passed away in 1889, and his wife followed him to the grave shortly thereafter.