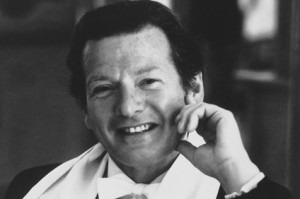 The world recently lost Sir Neville Marriner, a man who had a worldwide impact on music and musicians. Those of us who were lucky to know him and work with him have been forever enriched.

Sir Neville hired me as the associate principal cello of the Minnesota Orchestra the year he became music director of the orchestra. I remember a jury of distinguished looking silver haired gentleman, peering at me over their glasses. I’m sunk, I thought. My petite stature made me look even younger than I was. During the round of chamber music sight-reading with the concertmaster and other principals, I tried to sing the theme to the other musicians to indicate the tempo of the Beethoven string quartet. (My voice isn’t too good.) Later, quite embarrassed, I realized how cocky that must have seemed, but Neville appreciated spunk. He was amused. 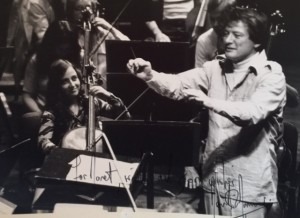 Neville kept us constantly off guard and entertained with his poker faced British wit. Once I remember him saying, “Second violins, those pizzicatos sound like golf balls hitting dead sheep.” Ever the prankster Neville often told the story of travelling to a London Symphony Orchestra concert with violinist Peter Gibb, a former RAF pilot who owned a Tiger Moth (a 1930’s bi-plane). “One day we took several bags of flour up with us and bombed the LSO bus on the road from Brussels to Oostend.”

One of our favorite stories concerns Minnesota’s close ties to the Scandinavian countries. A special program entitled Tonight Scandinavia in 1982 featured Sibelius Finlandia and several opera stars from Scandinavia including Håkan Hagegård, Swedish baritone, Martti Talvela, Finnish operatic bass, Birgit Nilsson, Swedish Wagnerian soprano and Judith Blegen, lyric coloratura soprano of Norwegian heritage. Victor Borge the Danish comedian with amazing pianistic abilities was also a guest artist. The evening was eagerly anticipated, as it was our music director’s International television debut, broadcast live. Royals and heads of state of each of the Scandinavian countries were in attendance. 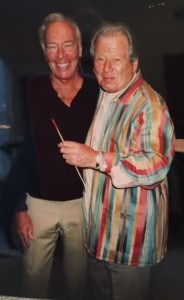 Sir Neville Marriner, accustomed to witty repartee, chatted with each performer for a few moments onstage before the aria was performed. Birgitt Nilsson quite the diva, was known for her singing of Wagnerian roles. She had many honors to her credit including several medals, which adorned her colossal chest. When it came time to converse with Nilsson, Neville was curious about Nilsson’s medals. He brandished his baton pointing directly at her ample bosom and said “I’m particularly fascinated by these rather large ones here.” You could see his face turn ashen as he realized what he had said. The musicians, bit their lips, held their breaths, anything to keep from losing it onstage. The audience tittered. But Nilsson immediately countered, “I have many more at home!” Nilsson thought she had told quite a joke as everyone burst out in uproarious laughter. 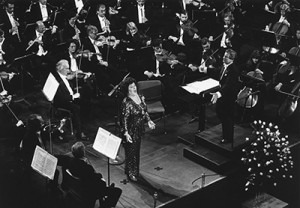 Marriner made over 600 recordings of 2,000 works. Our orchestra was fortunate to observe him in action. We did several recordings with him. He was hands-on and listened to every take. Neville tightly held a small pocket metronome to ensure that whenever we redid a segment it was precisely the same tempo of a previous take. During a cello or viola melody, he sometimes had half of us play separate bows to enhance the clarity. I must admit that during the brilliant Haydn Concerto recording with Cho Liang Lin, we on the first stands sat in the lounge and did not play the second movement. Neville sought a “more distant”, gentler sound for the slow lyrical movement and the second stands were farther away from the microphones!

Haydn: Violin Concerto in C Major, Hob.VIIa:1
III: Finale: Presto
Cho Liang Lin and the Minnesota Orchestra
Neville had his quirks. He conducted in a turtleneck over which he wore a colorful long striped shirt. Guest cellist Yo Yo Ma was quite amused when Neville once stopped the rehearsal. Before we knew it he had clamped his baton between his teeth to grab a pencil and mark the score, two sharp points coming out of either side of his mouth. We all laughed when Yo Yo stood up chomping on his bow. 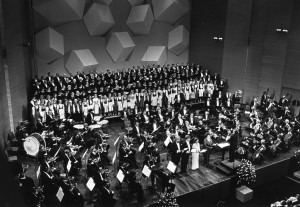 Beginning his career as a violinist, Marriner became the principal second violin of the London Symphony at age 30. But he and several colleagues wanted more of a say in the music making. They decided to get together to play smaller ensemble works in each other’s homes, especially neglected works of the baroque and classical eras when they were not well recorded or performed. Of course one thing led to another, a successful concert, a best-selling CD of Vivaldi’s Four Seasons, and the esteemed chamber ensemble, Academy of St. Martins in the Fields was born. Neville initially conducted with his bow from his position as the concertmaster. One day, the story goes, someone said, “Oh Neville why don’t you stand up and conduct like a man!” It was Pierre Monteux who suggested that Marriner conduct properly and he encourage Neville to study conducting with him (which he subsequently did.)

Neville’s fame was forever cemented when the ensemble recorded the music to the 1984 film Amadeus. Neville was the artistic advisor for the movie and the sound track became the best seller of all time with 6.5 million albums sold.

After his sojourn here from 1979-1986, Sir Neville returned to conduct on a few occasions once to perform William Walton’s Henry V with Christopher Plummer reciting Shakespeare’s famous lines. William Walton wrote the score to this and other film adaptations of Shakespeare’s works and Laurence Olivier’s film was what originally inspired Christopher Plummer to take up acting. It was a powerful evening especially due to the deep friendship the two men had for each other. I was able to snap a photo of them fooling around backstage. He will forever be in our hearts. Thank you Neville.