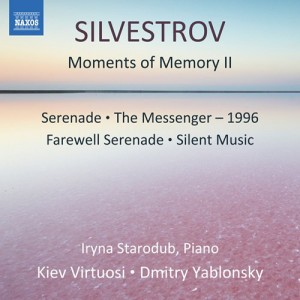 Ukrainian composer Valentin Silvestrov has said that ‘I do not write new music. My music is a response to and an echo of what already exists.’ This is particularly pertinent to works such as the Two Dialogues with Postscript that engage hauntingly with Schubert and Wagner, and the evocative Moments of Memory II which alludes to Chopin and yearns for an unreachable past. ‘Music is still song, even if one cannot literally sing it’, says Silvestrov.