Not invented by, but rather named for Domenico Alberti, who used this device extensively in his own keyboard sonatas, the Alberti Bass is a moving figure in the bass or left hand of keyboard music, derived from a three-note chord. It is particularly common in the piano sonatas of Haydn, Mozart, Clementi, Beethoven and Schubert where one can find numerous examples of its use.

Derived from the rather ponderous Basso Continuo of Baroque music, the Alberti Bass is its rather more dynamic successor. In an Alberti Bass the notes of a chord are arpeggiated or broken to create a moving figure. This acts as a “filler” pattern of continuous accompaniment to a melody and creates the illusion of harmonic change when in fact the harmonies remain the same (for example, if moving between tonic and dominant only). Perhaps the best-known example of this is in the first measures of Mozart’s Sonata in C, K545 (‘Sonata Facile’) where the Alberti bass creates an animated flowing accompaniment to the right hand, and in doing so gives the simple melody of the opening theme a sense of forward motion without losing its lyricism.


The Alberti bass is also used by Classical composers to imitate string quartet writing/texture within the scope of the pianist’s two hands alone, as for example in the slow movement of Beethoven’s ‘Pathetique’ Sonata, bars 1-16:

Beethoven also revolutionised the use and effect of the Alberti Bass. In his hands it is less an accompaniment to a singing melody and more to support arpeggios, which are sometimes simply allowed to sound on their own to create drama and tension. In the finale of the ‘Moonlight’ Sonata the left hand oscillates frantically with a bizarre Alberti bass which incorporates dissonant neighbour notes. Melodic fragments occasionally appear above it, but here the emphasis is altered, with all the attention on the harmonic shifts rather than structural or thematic changes.

Beethoven: Piano Sonata No. 14 in C-Sharp Minor, Op. 27, No. 2, “Moonlight” – III. Presto agitato
The Alberti Bass can still be found in contemporary piano music, most notably in the works of Philip Glass, who reduces the device to its simplest form. In his Metamorphosis series, for example, the individual broken chords and arpeggios (usually the span of a bar or a pair of bars) hold little musical interest in themselves, but over time create a powerfully cumulative effect of subtly shifting harmonies and musical colours.

Philip Glass: Metamorphosis II
For the pianist, the challenge in playing an Alberti Bass effectively is to create a dynamic accompaniment which sounds natural and fluid, and which also confirms the intended harmonic effect. Physically, a soft mobile wrist with some lateral rotary movement which prevent the notes sounding dry and monotonous. Careful use of the pedal is necessary too, to avoid blurring the melody or adding too much resonance – remember, this is an accompaniment. The best way to add resonance without blurring the melody is to use “finger pedalling” where instead of using a conventional legato touch, the pianist over-holds the notes to create a harmonic effect without dryness. With this technique, the sustaining pedal can be employed to create dabs of colour and warmth of sound, but is not necessary to connect the notes. The over-holding of certain notes in the Alberti Bass, specifically those which form the root of the chord from which the harmony emerges, creates a wonderful effect – an obvious bassline which adds to the texture of the music and provides the harmonic foundation on which the rest of the music is built. In the first movement of his penultimate Piano Sonata (D. 959), Schubert makes it even easier for the pianist to create this effect by adding a semibreve to the left hand Alberti figure, a device which is repeated with even greater effect in the first subject of the final movement where it lends resonance and a simple melody to the bass line and contributes to the overall texture of this passage. 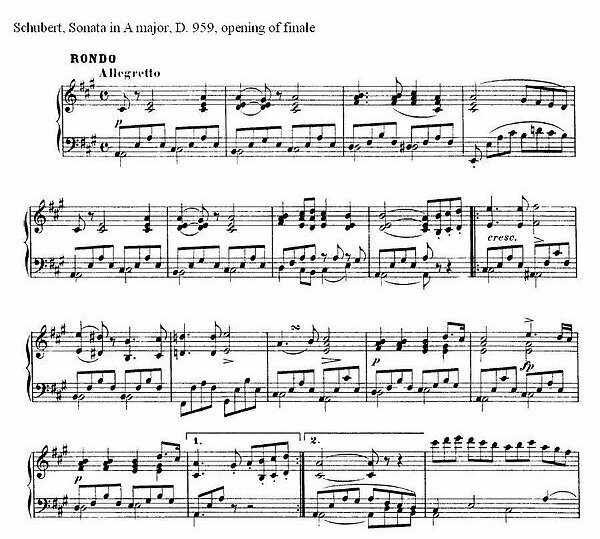 Opening of Schubert’s Piano Sonata in A, D. 959, finale