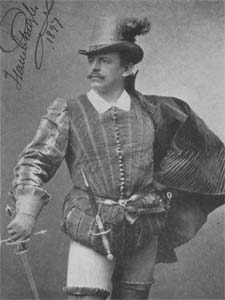 Scottish physician Arthur Conan Doyle (1859-1930) took up writing while still a medical student at the University of Edinburgh. His first stories were mysteries, but he also wrote about the difficulties of life as a fledgling doctor and many historical novels, such as The White Company. How he lives on in our memory, though, is for his consummate detective, Sherlock Holmes.

As common with most fictional detectives, Sherlock had a few idiosyncrasies, one of which was his violin. We also learn in some of the stories that Holmes goes to the opera and follows composers such as Meyerbeer, Wagner, and Offenbach.

The Hound of the Baskervilles (1902) closes with these words by Sherlock:

I have a box for Les Huguenots. Have you heard the De Reszkes? Might I trouble you then to be ready in half an hour, and we can stop at Marcini’s for a little dinner on the way?”

Les Huguenots had its première in Paris in 1836 and was an important opera for Covent Garden, being chosen for the opening of the present building in 1858. When the opera moved to New York in the 1890s, the Met performances were often called ‘the night of the seven stars’, as the cast would include Lillian Nordica, Nellie Melba, Sofia Scalchi, Jean de Reszke, Édouard de Reszke, Victor Maurel, and Pol Plançon.

Jean and Édouard de Reszke, tenor and bass, were brother opera singers from Poland; Jean was the biggest male opera star of the late 19th century and his brother had a similarly august reputation. Jean sang the role of Raoul in Meyerbeer’s Les Huguenots at Covent Garden from 1888 to 1893. Édouard sang the role of St. Bris from 1880 to 1893 and took up the role of Marcel in 1897 and 1900. 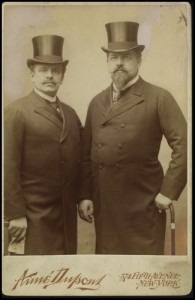 The last time the de Reske brother sang together in Les Huguenots at Convent Garden was some 10 years before The Hound of the Baskervilles was published. But the brothers singing in that particular opera was certainly international news.

By the way, it is not eight o’clock, and a Wagner night at Covent Garden! If we hurry, we might be in time for the second act.”

The second opera house at Covent Garden opened in 1847 as the Royal Italian Opera. All operas in the house, no matter what the original language, were performed in Italian until 1892, when Gustav Mahler presented the debut of Wagner’s Ring cycle in German. It was at that point that the word “Italian” was dropped from the house name. We don’t know what Wagner opera Holmes had in mind, but Wagner’s Ring cycle is certainly a possibility.

Sherlock plays a song from an opera when giving an evil-doer some time to think in “The Adventure of the Mazarin Stone” (1921):

I shall try over the Hoffman ‘Barcarole’ upon my violin. In five minutes I shall return for your final answer. You quite grasp the alternative, do you not? Shall we take you, or shall we have the stone?”

Holmes withdrew, picking up his violin from the corner as he passed. A few moments later the long-drawn, wailing notes of that most haunting of tunes came faintly through the closed door of the bedroom.

The barcarolle, “Belle nuit, ô nuit d’amour,” a duet for soprano and mezzo that opens the third act of the Offenbach’s The Tales of Hoffmann, is one of the most famous barcarolles ever written and one of the most popular songs to come from opera. In the story, however, it’s a recording that’s playing the melody as Holmes listens to the confession of the thieves when they think he’s otherwise occupied.

Offenbach : Les contes d’Hoffmann: Act II: Belle nuit, ô nuit d’amour, “Barcarolle” (Jessye Norman, soprano; Brussels La Monnaie Opera Orchestra ; Sylvain Cambreling, Conductor
As we can see from these few references, Conan Doyle, and by extension, his detective Sherlock Holmes, are not uninformed on the musical front ! Although these are only 3 references out of some 4 novels and 56 short stories, this isn’t the end of the story of Sherlock and music – to be continued…