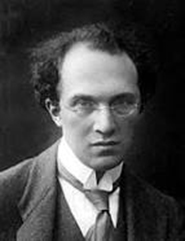 Franz Schreker (1878-1934) is largely forgotten today, but in his time he was Richard Strauss’ main rival for the title of Germany’s leading composer of opera. Schreker wrote complex harmonic scores using advanced chromatic harmonies and large orchestras, yet his music nevertheless contains a lyrical and iridescent quality. And it was his opera Der Ferne Klang (The Distant Sound), premiered at the Frankfurt Opera House on 18 August 1912, that decisively established Schreker’s reputation. The libretto, written by Schreker himself, details the failure of love and the decline of an artist. The storyline covers a period of 15 years and takes place in Germany and Venice around the turn of the century. Young composer Fritz leaves his Grete, planning to return when he is famous. However, Grete is gambled away by her alcoholic father, and eventually works in a dance salon as a courtesan called Greta.

When Fritz finds her, he calls her a harlot and leaves again. Greta becomes the courtesan of a Count who had been wooing her, and five years later, Fritz succeeds in having his opera “The harp” premiered. Grete, who has since been abandoned by the Count and is now a common streetwalker called Tini, attends the performance. When she recognizes that she is the main protagonist, she faints and the premiere turns into a disaster. Eventually she learns that Fritz is terminally ill, and the two lovers meet again. However, their newly found happiness together comes too late. Fritz finds his mysterious “distant sound,” and dies in the arms of his long-lost love. Schreker’s drama, drawing much influence from Freud’s discovery of the unconscious, is set to music employing a wide range of stylistic features and instrumentation, including the harp, celesta and piano. For one reason or another, Schreker’s music was unable to find continued success, and the Nazis branded him a “degenerate” in 1932.