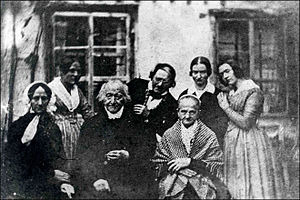 The supposed discovery of the only authentic photograph of Constanze Mozart caused considerable excitement in 2006. The media giants BBC and the New York Times reported that authorities in the German town of Altötting had found and authenticated a print made from a daguerreotype showing Constanze outside the home of Swiss composer and musicologist Max Keller. In this photograph, the 78 year-old Mozart widow is seated front left, next to Max Keller, with his wife Josefa on this right. Keller’s daughters are in the back row alongside Keller’s brother-in law Phillip Lattner and the family cook. The original was apparently taken in October 1840 and the copy made in the second half of the century. But how do we know that the woman in the photograph is actually Constanze Mozart? What we do know is that Constanze was 15 when she first met Mozart in Mannheim. Mozart, 21 at the time, didn’t pay any attention to her but was head over heels in love with her sister Aloysia. That relationship ended abruptly, but by 1781 Mozart and Constanze both lived in Vienna. Against the wishes of both parents, they got married in August 1782. 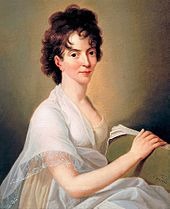 After Mozart’s death in December 1791, Constanze eventually married the Danish diplomat Georg Nikolaus von Nissen, and together they organized and published Mozart’s works, and collaborated on a biography. And it was through von Nissen that Constanze became friends with the Keller family. Yet, after von Nissen’s death in 1826, contact between Constanze and Keller ceased. In addition, according to scholars “Constanze Mozart was crippled by arthritis by 1840 and died in 1842. There is absolutely no way she could have traveled to visit Max Keller during the period when the photograph was taken.” The authenticity of the photograph has also been questioned on scientific grounds. “There are no outdoor photographs of groups of people dating from 1840,” suggests one expert, “because the lenses invented by Joseph Petzval, which were to make such portraits possible, had not been invented yet.” Actual scholarship had known about this picture since the 1950’s, as it had already been published twice before. The imaginative brainchild of Keller’s grandson, it was already declared a hoax at that time. Come to think of it, it’s a practical joke that would almost certainly have amused Mozart himself.