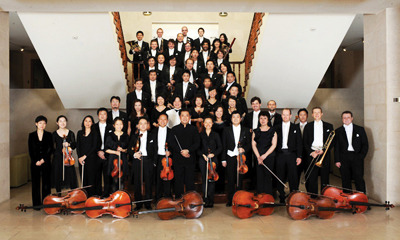 When Fernando Chui Sai On took over the political reigns of the Macau Special Administrative Region in December 2009, he not only promised a speedy recover for the gaming industry, but also voiced his unbridled and continued support for local cultural and creative industries. While obviously pleasing the moguls of luck, this commitment to maintain, or even diversify Macau’s cultural strata – by which he undoubtedly means the broadening of Macau’s economic base – is nevertheless highly significant. At a time when European cutbacks for the Arts are reaching alarming levels, and when US-American organizations are more or less successfully negotiating the special interests placed upon them by all-consuming corporate sponsorships, can this seemingly outdated model of comprehensive governmental support for the Arts still hold validity in the 21st Century? It might be possible to formulate at least a partial answer by looking at the Macao Orchestra.


In 2008, Lü Jia was engaged as Music Director and Principle Conductor with the clear aim of resurrecting a musical body that had languished in a state of amateurish paralysis for an extended period of time. Rather coincidentally, I recently found myself wandering the streets of Macao. Growing increasingly tired of being trampled by chain-smoking treasure seekers hurriedly scampering to deposit the mortgage payments for the family tractor, and of being solicited by seven-foot women in garishly colourful outfits the size of postage stamps, I chanced upon a performance of the Macao Orchestra on 18 June 2011. Featuring the Venezuelan-born conductor Jose Luis Gomez and Paolo Morena as the soloist, this concert provided the opportunity to gauge what actually has been achieved and accomplished over the last couple of years.

On offer was a rather ambitious, and somewhat unusual programme pairing Max Bruch’s 2nd Violin Concerto – that’s not the famous one – with the second symphonic essay by Sergej Rachmaninov. I say unusual, because the second Bruch concerto is hardly ever heard in the concert hall. In contrast to the highly touted G-minor concerto – which Joseph Joachim declared one of the four great German violin concertos – Bruch’s D-minor concerto does not easily adhere to the concept of a prototypical concerto per say, but rather unfolds as an orchestral fantasy with the addition of the solo violin. Initially then, this turns out to be a clever bit of programming, as it satisfies both the insatiable audience hunger for musical acrobatics and at the same time provides a platform for orchestral training. Brahms, of course, called this concerto “intolerable for normal people”, but he clearly missed the boat. Rather than striving for goal-oriented climaxes resulting from telescopically projected thematic materials, Bruch specifically wrote the piece for the Spanish violin virtuoso Pablo Sarasate, whose rhapsodic playing style was uniquely suited to navigate the flowing melodies and virtuoso passages. Since the resulting score is of incredible rhythmic flexibility, it poses special challenges for the artistic mediation between soloist and orchestra. It was probably the Latin pairing of conductor and soloist that provided the orchestra with the necessary confidence to achieve a credible performance. Probably the most striking aspect was the comparatively slow and amorphous tempo of the opening movement. Yet, the orchestra was not intimidated. Rather, they responded as a unit to the ever-changing rhapsodic tempos, instilling a sense of quiet dignity. The result was a musical conversation that convincingly reflected Bruch’s feelings of nostalgia and melancholy. This musical discourse provided, above all, clear evidence of just how responsive the orchestra has become. This same level of orchestral responsiveness also surfaced in the performance of Sergej Rachmaninov’s 2nd Symphony. A staple of the orchestral repertory-and indeed a necessary stepping-stone for building all manner of orchestral technique-the composition also presents challenges to the audience. Espousing an ironic and introspective point of view-after all, the composition originated during four months of psychological treatment-the internal hidden meanings are difficult to convey. Yet the orchestra, despite some obvious shortcomings, responded with an honest attempt to engage with the music.

In a relatively short period of time, Lü Jia – who will conduct the season ending concert on 31 July – has apparently been able to stimulate and shape an emerging orchestral body. Clearly, much work remains to be done-ranging from improvements in sectional personnel to work on orchestral balance, sound and musical refinements-yet, the Macao Orchestra is definitely on the right track. Some of these improvements will need time and commitment, but given the promised financial stability, there can be no doubt that a viable and living artistic entity is being created. Whether this progress and the Orchestra itself is sustainable, now depends very much on how the organization approaches the changing social attitudes towards Classical music, and how it views itself in the incredibly competitive Macao environment.

As I left the performance venue to rejoin the one-celled organisms still gleefully scurrying for a chance to meet poverty in short order, I was struck by the immensity of having to compete against a force that considers pushing a button or guessing a number an enviable form of entertainment. The concert hall hadn’t even been half full, there had been no advertising or noticeable marketing, and the graphic design and layout of the house programme was slightly less attractive than the hairballs regurgitated by my cat. And then it struck me; the Macao Orchestra is not competing at all. They are taking care of the purely musical aspects, and they are doing a good job. The rest is accomplished-and I do use this word with a good deal of sarcasm-by a variety of departments within the Cultural Affairs Bureau. If I were not convinced that these departments are riddled with arrogance, incompetence and utter ignorance, I would be forced to conclude that they are trying to sabotage this project. Given that the Macao Orchestra now has a viable product, shouldn’t everybody be pulling on the same string? Please, give the Orchestra a chance to succeed by allowing them to assemble a team of experts capable of efficiently dealing with all aspects of the incredible musical, promotional and marketing challenges. In the meantime, government bureaucrats could always be sent to push buttons or guess numbers.