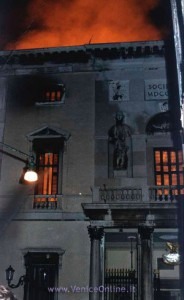 Have you ever heard of Enrico Carella and Massimiliano Marchetti? There is really no reason why these names should be particularly memorable, except for the fact that these two knuckleheads deliberately set fire to one of the most famous opera houses in Europe on 29 January 1996. During renovation work on the Teatro La Fenice opera house in the city of Venice, the two electricians were found guilty of setting the building ablaze because their company was facing heavy fines over delays in repair work. Carella, the company owner was sent to prison for seven years, while Marchetti received a six-year sentence. Eight other people, including the former mayor of Venice, Massimo Cacciari and La Fenice’s former director, Gianfranco Pontel, were also on trial for negligence, but were acquitted. Curious as it may sound, and partly because of it, La Fenice — literally translated as “The Phoenix” in reference to the mythological bird that cyclically regenerates by arising from the ashes of its predecessor — was no stranger to fire. 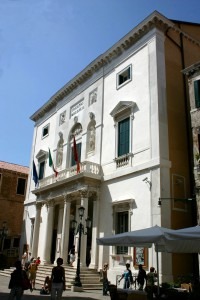 In 1774, fire destroyed the San Benedetto Theatre, one of seven working theatres in the city of Venice. It was quickly rebuilt, however, a legal battle soon ensued between the owners of the new theater and the Venier family, who owned a part of the land. The Venier family won the judgment, forcing the Company to sell the Theater. Undeterred, the company made plans to build a larger and even more lavish and luxurious opera house on the Campo San Fantin. They decided to call it “La Fenice” in order to symbolize its proverbial rising from the ashes, and called for architectural proposals. 29 plans were submitted, and with exceedingly high-pitched vocal help from the Venetian public, Gian Antonio Selva was charged with the construction. For the exterior, Selva opted for a simple neo-classical design that seamlessly integrated with its urban surroundings. The real genius of his design, however, emerged in the half-elliptical plain of the auditorium. Contemporary critics and architects considered “the elliptical auditorium the natural and best shape of a theater, because the human voice propagates as elliptic acoustic waves, as opposed to other acoustic sources that are omnidirectional, such as the sound of a bell.” Since an elliptical space can cause uneven sound distribution, the walls of the theatre were covered with artistic paintings and stuccos, preventing specular reflections and providing for a diffuse sound field. Completed in 1792, La Fenice immediately gained a high reputation for its acoustic properties and charming sound characteristics. 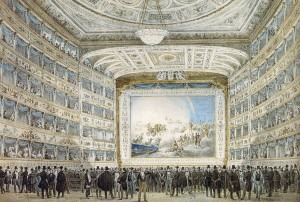 It was inaugurated with the opera I giuochi d’Agrigento (The Games of Agrigento) — referring to the ancient Greek city of Acragas on the southern coast of Sicily — by the Neapolitan composer Giovanni Paisiello (1740-1816). By the way, Paisiello also wrote a highly popular Barbiere di Siviglia (Barber of Seville) just before Rossini stole his thunder with an opera by the same name. Subsequently, Rossini premiered his operas Tancredi and emiramide at La Fenice in 1813 and 1823 respectively. Bellini followed with I Capuleti e i Montechi in 1830, and with Beatrice di Tenda in 1833. Not to be outdone, Donizetti wrote three operas for La Fenice, among them Pia de’ Tomei in 1837. As such, the three greatest Italian composers of the period affirmed the theater’s preeminence, but in December 1836, La Fenice burned to the ground yet again. Giambattista and Tommaso Meduna were commissioned to design a new theater — incorporating substantial changes to the architecture of the hall — and Tranquillo Orsi furnished the decorations. On 26 December 1837, La Fenice was reborn and the theatre hosted Verdi’s Nabucco in 1842. Over the next 13 years the premiers of Ernani, Attila, Rigoletto, La Traviata and Simon Boccanegra followed. The theatre underwent a number of substantial renovations throughout the second half of the 19th century, and was closed during WW1. La Fenice’s international reputation was reestablished when the Venice Biennale invited the First International Festival of Contemporary Music in 1930, leading to significant operatic premiers in the 20th century. 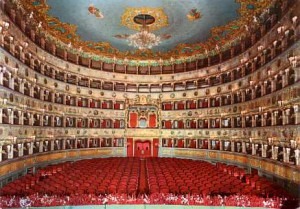 Among them, Igor Stravinsky’s opera The Rake’s Progress, The Turn of the Screw by Benjamin Britten, and Intolleranza 1960 by Luigi Nono. The malicious and cowardly arson of 1996 destroyed not only a historic building, but forever obliterated the unique sound qualities offered by La Fenice. After a two-year delay, with the obligatory wrangling and under-the table payments, reconstruction got finally underway in earnest in 2001. The principle, yet highly suspect aim was to recreate the ambience and acoustic qualities of the original theatre at a cost of 90 million Euros. According to most experts, however, the new hall “lacks resonance and the colors are painfully bright.” It has even been described as “kitsch, a fake imitation of the past.” And what about the happy arsonist? Like a real man, Enrico Carello fled the country after his final appeal was turned down, and he was eventually arrested at the Mexico-Belize border in 2007. Extradited to Italy, he served 16 months of his sentence before being released on parole. Wonder if he has plans to torch anything else in the near future? A real Italian hero like that certainly bears following on his Twitter account!!!