Composers Anecdotes
A Riddle Motet or what was Ghiselin Danckerts up to?
by Maureen Buja April 17th, 2018 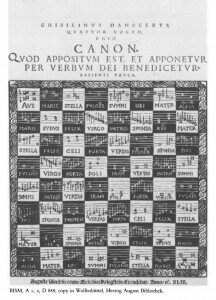 We have a motet by the Dutch composer Ghiselin Danckerts (ca. 1510-1567) that has caused much puzzlement over the years. Originally published in 1535, but now lost, Danckerts’ motet Ave maris stella (Hail, star of the sea), was reprinted and is best known for its appearance in a 1613 music theory book.

Clearly, this isn’t your normal musical score – it’s been all chopped up into 64 squares like a chessboard.

Let’s start with what’s written at the top. (Ghisilinus Danckerts Quatuor Vocum Unio). This lets us know that we’re looking for a four-voice piece. The rest, Quod appositum est, et apponetur, per verbum dei benedicetur sapienti pauca, tells us that the four voices can be combined. A deeper reading also tells us that the voices should be moving in graphically comparable way, i.e., symmetrically.

Pietro Cerone, the author of the 1613 treatise where this work was preserved, tells us that he tried and tried to solve this riddle of a motet but failed. He was particularly unhappy because in a treatise that Danckerts wrote around 1555, he had said that there were more than 20 solutions to the riddle! 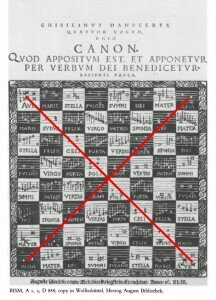 Once you start looking more closely at the chessboard, however, you can start to see that there are some patterns. When you label the positions at the bottom (Rook – Knight – Bishop – Queen – King – Bishop – Knight – Rook), we see that the religious figure, the Bishop, is associated with the word ‘Dei’ (God). The King is associated with the word ‘Fulgens’ (Bright). Note, too, that these two notes are ‘white,’ i.e, whole notes that are not coloured in.

You will also note that many squares have both upper and lower notes – closer examination shows us that this only happens with the squares on a diagonal from the corners. Using chess notation, where the horizontal rows are lettered a-h, and the vertical rows are 1-8, starting the lower left corner, we see that a1, b2, c3, d4, e5, f6, g7, and h8 have the notes for two voices as do h1, g2, f3, e4, d5, c6, b7, a8. 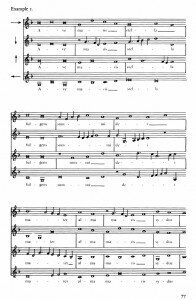 So, the first and easiest solution to the riddle is to read starting at the top left and bottom right corner. We know that the text is the familiar hymn Ave maris stella. The soprano line is read from left to right on the top line: Ave maris stella, fulgens summi dei mater alma, etc. The bass will read from right to left on the bottom row starting at h1, the alto will read from a8 downward, and the tenor will read from h1 upward. And so we have our first 4 voices. Where there are multiple choices in a square (the diagonals), each voice chooses one and the other voice takes the other – the voices that are moving vertically take the white void notes and the voices that are moving horizontally take the black filled notes.

What about the other 19 pieces? The Dutch musicologist Hans Westgeest solved this in 1986, showing that layout of the words on the chessboard are symmetrical – look, for instance, at the centre, where we have ‘Iram’ at c4 and d5. Using those as a start and, again, moving symmetrically, we can construct the next motet on ‘Iram vertas patris summi,’ another one on ‘Summi dei,’ another on ‘Mater dei,’ and so on. All the motets are made of 16 squares, each using one-quarter of the 64 possible squares.

Unfortunately, there isn’t a recording of Danckert’s puzzling masterpiece, so we’ll leave you with a section of his mass for the Virgin Mary.