We caught up with Maestro Riccardo Frizza who is currently in Tokyo in rehearsals for La Traviata at the New National Theatre. The production, which opens on 16 November, is part of the 20th anniversary celebration of the house. This will be the Maestro’s 10th time in Tokyo and one aspect of the Japanese audience he respects is that they are passionate opera lovers. Many of the audience members have wide experience attending operas in the major houses in European, including Vienna, Paris and Milan. And, much more than in Europe, they are also ardent takers of selfies with the stars and conductor.

Maestro Frizza’s operas this year, in addition to La Traviata, include Il Barbiere di Siviglia, Lucia di Lammermoor, and La Cenerentola. When we asked if he had a favourite opera or opera composers, he just laughed and said whatever he was working on at the time. He’s noted as a bel canto specialist and when he was contrasting a bel canto production versus a verismo one, i.e., Rossini versus Verdi, he said that the most difficult part was keeping the orchestra light, but at the same time maintaining the intensity. Rossini was particularly hard for an orchestra to capture the light but sparkling aspect of the music. It is critical that the voices not be covered. The orchestra has to give space to the voices. In big houses, this can be particularly difficult – the house has to be filled with sound, but the singer has to still be heard over the orchestra.

We asked about working with new stagings and productions and he said that it was critical for the staging to respect the music. Sometimes this can be a problem, but being involved in the discussions before the production starts can often ease the difficulties. He welcomes the new because of what it can offer him in terms of options for his own new interpretations from the podium. 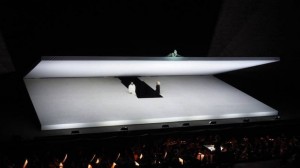 We talked about supertitles and their effect on the audience. In general, he approved of them, particularly for operas in the less common languages. However, he urges the audience to make the effort to learn the libretto before attending an opera – the distractions are fewer when you can listen to the music itself and not have to temper it through reading.

Summer festivals are a delight for him, particularly as they grant so many opportunities for experimentation. Many festivals are held in outdoor spaces which can provide a change from the constraints of a regular opera house. He relishes the chance of finding new repertoire and new ideas for productions. He mentioned in particular the ‘opera multimediale’ setting of Aida by director Francesco Micheli. It was set in a giant laptop, and for the final scene, as Aida and Radamès are entombed, the lid of the laptop closed on them, ending their lives and the opera in one gesture.

In closing we asked about his spare time, which, according to him, is non-existent. He is currently in Japan while his wife, Spanish soprano Davinia Rodriguez, is in Italy. Next, she’ll be performing in China while he’s back in Europe. It makes them treasure their time at home in Brescia with their daughter when they can capture it.