Guest Posts
Resetting the Song
by Matthew Bennett May 6th, 2011

On some recent recording sessions in the wonderful Snape Maltings I was reintroduced to the music of young American composer Nico Muhly. His music struck me in a way that many contemporary composers don’t. Although his music encapsulates a range of genres, techniques, and styles, it still retains a sense of proportion, with melodic material at the forefront. 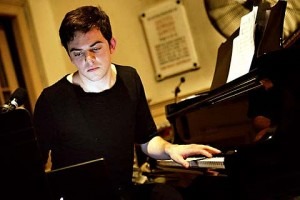 The first work of Muhly that I encountered was Pater Noster written for The Edington Festival of Music within the Liturgy in 2008, where I was singing in the Consort. This setting, highly influenced by Stravinsky’s setting of the same text some forty years earlier, had clearly been written by a composer with an understanding of the choral idiom, which many contemporary composers lack or are not interested in. The similarities to Stravinsky are various. The opening is a more discordant cluster than the Stravinsky, and repeats the text Pater noster (Our Father), giving a more fervent feel. The central section of the piece has the distinctly contemporary performance direction of ‘insect-like’ but the hocketing texture references the medieval (which Stravinsky also uses in his Symphony of Psalms). Muhly incorporates both the jagged opening, with the pointillist central section, to a lyric close without any jarring or perturbing breaks.

At Snape, I first heard Muhly’s orchestrations of Gibbons and Byrd. These are particularly effective settings, and his interpretation of the familiar Gibbons anthem ‘See, see the word is incarnate’ resets the tenor with new accompaniment – creating another verse anthem, Motion. The echoes of the English tradition blend seamlessly with Muhly’s voice, reminiscent of Copland and Adams. Neither Muhly’s contemporary material nor the Gibbons melody seem out of place – some would reiterate the oft-used phrase of a ‘synthesis’ of old and new, but here there is no synthesis as such. Motion is perhaps the most unusual of the settings: the piece is built on short repeated motivic cells from the original Gibbons, as well as an extended quotation and ornamentation of one of the verses, where the melody interweaves between the viola and the cello. Ending with the verse ‘in the sight of multitudes a glorious ascension’ in mind, Muhly encapsulates the ecstatic sentiment of the text. The composer drew the title from the text of the anthem: a vision of Christ’s reign ‘the blind have sight and cripples have their motion’.

I should add that the rest of the music on the disc is equally worthy of mention. Seeing is believing, a concerto for six-string electric violin is the title piece of the disc. Written for Thomas Gould and the Aurora Orchestra, it is an intricate work that makes the most of the violin’s electronic aspects, as well as the extended acoustic range of the strings. Muhly explains in the liner notes that: ‘The music begins and ends with the violin creating its own stellar landscape through a looping pedal, out of which instruments begin to articulate an unchanging series of eleven chords which governs the harmonic language of the piece. With this added capability, the soloist can create a full texture from the instrument by utilising the electronic ‘tape’ loops and also play with extraordinary virtuosity against the chamber orchestra accompaniment.’ Step Team is a highly rhythmic work, a ‘form of almost militaristic dancing involving the entire body as well as the voice’. Comprising of discrete musical sections, the bass trombone works acts as a referee, unifying all the musical element by reaffirming the original tactus before the individual instruments break-down the pulse.

I would encourage anyone to hear Muhly’s work, and having signed a recording deal with Decca Records more of us will be able to. The first recording of his choral music, A Good Understanding, is a worthy starting place with expertly sung performances by the Los Angeles Master Chorale directed by Grant Gershon. A number of works in the disc, including Senex Puerum Portabat, demonstrate Muhly’s ability to write coherently for instruments and choir – the polyphonic brass writing that contrasts with the choir is particularly striking – and introduces his unique orchestrations that are so exciting. For further listening, there is a short wait, but keep an eye out for the release Seeing is believing in June 2011 – you can see a sneak preview on this YouTube video of the project.