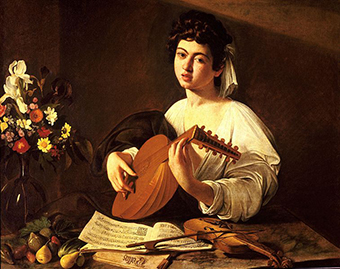 Our image of the Renaissance lutenist is of the musician bending over his lute, generally surrounded by his music books.

But we know from contemporary sources, that 15th-century lutenists made their art in company. The Ferrarese virtuoso lutenist Pietrobono (c. 1417-1497) worked with a ‘tenorista,’ i.e., another lutenist who provided a firm base against which he could play a highly ornamented variation on the melody.

The evidence for this shows up not in pictures or contemporary writing, but in the Latin poems of the period. Pietrobono’s repertoire came from all of Europe. In answer to a question about what he played, he is said to have responded ‘Whatever songs Britain sings, beloved of the Muses, and France, no less favoured by the Muses, the beseeching laments of Spain in her wide lands, and the songs of serious Italy.’

Pietrobono was an instrumentalist and not a singer and so it would have meant the involvement of a third person to perform a song with words. The repertoire of the lutenists could include both songs and purely instrumental music that had been transcribed for the lutes. 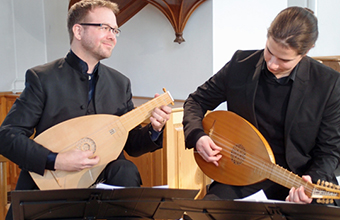 In this performance, our two lutes accompany a singer in Johannes Bedyngham’s Fortune alas, a plea to Lady Fortune to be kinder. He asks why she should be wasting his life by keeping him in prison and accuses her of liking the fact that she can bring a man from success to failure in an instant. In the original manuscript that this work would have been found, only the top voice would have had text while the lower voices would have been left untexted. This provides the modern performer with the problem of adding text to the lower voices or just have them be vocalized, with the text only in the top voice. For the lute duo accompanying a singer, this is not a problem – they’re only going to play!

Bedyngham’s setting of this anonymous text was very popular all over Europe and variously appears in other places with the title and new texts set to the older music. It was discovered by scholar David Fallows that the first setting had been the English text of Fortune alas. The vocal line is quite simple, and the accompaniment below it moves with the voice.


And now listen again – the vocal has been decorated, but enough of the original remains that you can recognize it. This setting shows off both the skill of the lutenist and illustrates how reliant the decorated voice is on having a solid accompaniment behind him that he can play against.


Marc Lewon, lutenist, has long been a scholar and performer of early music. He plays the lute and vielle and is Professor of lute at the Schola Cantorum Basilensis, where he had begun his music studies. 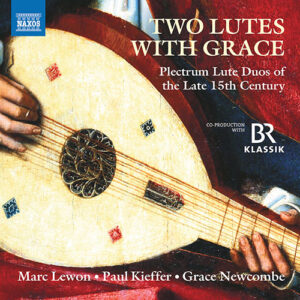