Composers Anecdotes
The Power of a Hat
by Maureen Buja February 19th, 2017 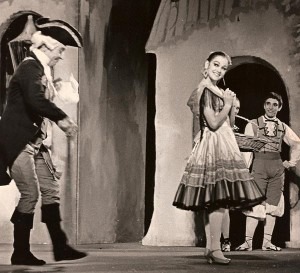 Chris van Niekerk, Maxine Denys, and Harold King in the early 1960s in a production of The Three-Cornered Hat in Capetown.

Manuel de Falla (1876-1946) started with a story about a lecherous magistrate and his desire for the miller’s virtuous wife (El corregidor y la molinera) and revised it into The Three-Cornered Hat (El sombrero de tres picos, 1917). As a ballet, The Three-Cornered Hat, it was given its premiere in London, staged by Diaghliev, choreographed by Massine, with stage designs by Picasso.

The ballet’s introduction sets us up immediately for the role the military will play, through its trumpet and drum opening:

Falla: El sombrero de tres picos: Introduction (Asturias Symphony Orchestra; Maximiano Valdes, cond.)
As this is a ballet, each of the major characters has a solo dance and in Part I, it’s the Dance of the Miller’s Wife. She dances a brilliant fandango, see below starting at 9:04. In the video, at 11:00, the aged Corregidor starts watching her from behind the well. 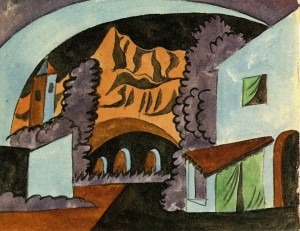 Part I: Danza de la molinera (Fandango) (Dance of the Miller’s Wife)
The three-cornered hat, or tricorn, is the symbol of the magistrate and of his power. At the end of the ballet, the magistrate falls in some water, takes his clothes to dry and he takes a nap and they are stolen from him by the miller, who is going to go and seduce the Corregidor’s wife. Left with nothing to wear, the Corriegidor wears the Miller’s clothes, only to be arrested by his own men, who mistake him, in the best tradition of theatre, for the Miller. In the end all the conusions are cleared up, the Miller and his wife are reunited, and the poor Corregidor is tossed up in a blanket by the men of the town (41:16 in the video above).

Throughout the ballet, Falla uses the traditional dances of Spain: the fandango, a seguidilla, a farucca, and the final jota. He brings traditional life in a small village out in his comic telling of the story and the manipulation of traditional storylines is a very 20th century twist. The Miller’s Wife is not seduced but is very much in control of her situation and the men around her. The Miller uses others’ jealousy and protectiveness to manipulate the actions and all comes right in the end.