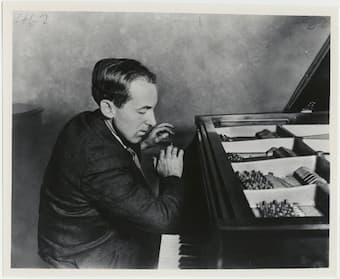 Henry Cowell at the keyboard

For American composer Henry Cowell (1897-1965), the piano wasn’t just an instrument where you sat down at the piano stool and played the keys. He used the pianist as the sound generator for all kinds of sounds on the piano.

For some pieces, the pianist sits at the keyboard and plays the inside and outside of the piano, and in other cases, it requires two people.

In The Aeolian Harp (1923), the pianist plays the keys, plucks strings inside the piano, and uses the pedals to sustain or mute the sounds, all while standing at the keyboard. The keys are depressed slowly, so that the string is not hit by the hammer, while at the same time the strings are plucked inside the piano. In other places, the strings are swept with the fingers.


As you can see here:

A later work, The Banshee, uses those same ideas of strumming, stroking, scraping, muting the strings. The directions for the performer instruct him on when to use the flesh of his finger and when to get a sharper sound by using the backs of the fingernails or using the flat of the hand.


And now, to see how it’s played. The pianist is in the piano, rubbing his fingers on the strings, while his assistant sits at the piano keys, holding down the damper pedal. 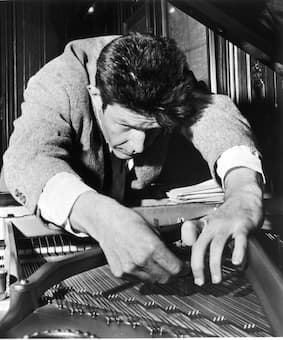 These new ideas would be followed by a student of Cowell’s. Starting in the late 1930s, American composer John Cage needed a large percussion section in a small space and after experimenting with plates and nails, used wooden screws, nuts and weather stripping to change the piano from one kind of percussion instrument to a very different one.

The first piece he wrote for prepared piano was Bacchanale, for a single performer and mostly involved using weather stripping. Unlike later pieces, where he was very specific about the placement of the items in the piano, here, the performer is encouraged to experiment to ‘determine the position and size of the mutes.’


His 1943 composition, Tossed as it is Untroubled, was created for the dancer Merce Cunningham. This piece uses the material places on the piano strings to change the sound, but pianist is still playing the keys.

John Cage: Tossed as it is Untroubled (Boris Berman, piano)


To see the inside of a prepared piano, this is Ianara Ferreira playing Cage’s Sonata V. The screws are not screwed into the wood of the piano, but the thread on the screw helps it stay in place against the string. The screws are not just placed in the strings – there’s a three-part process: first, lift the dampers, second, use a rubber wedge to separate the strings; third, insert screw, remove wedge, release damper pedal.

A film on the artist Alexander Calder used music for prepared piano by John Cage and the opening shots of nature work well with Cage’s sounds. In the film proper, Cage recorded sounds while Calder was at work creating mobiles and edited that to create the rest of the soundtrack. The physical nature of Calder as an artist comes through the sounds.

Works of Calder, 1950 by Herbert Matter

Cowell’s and Cage’s work on creating a new sound world for the piano were never really followed by other composers, largely because electronic instruments created the opportunity for making new sounds digitally. Although Cowell experimented with piano sound and different ways of playing it, he didn’t go as far as Cage did in adding material to the strings to change their sounds. Cage defined the ‘prepared piano’ and few could follow that path.