Blog
Playing only One Note
by Maureen Buja September 28th, 2014 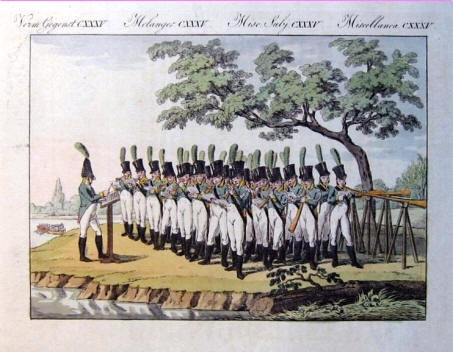 Russia is home to many unique things and in music, one of the unique groups is the Horn Orchestra. So, you’re thinking – what’s so strange about an orchestra made up of horn players? The unique aspect comes in when you consider that in this orchestra, each horn only plays one pitch.

The Russian horn band was invented in 1751 by J.A. Maresch (1719-1794), a horn player from Bohemia. In creating a brass orchestra made solely of hunting horns, he founded a new genre of music that was completely to the liking of the Russian aristocracy. One story tells that the Master of the Hunt under the Empress Elizabeth, Prince Kirilovich Narishkin, was unhappy with the wild pitches that the hunters used and he had new horns created that were pitched to a D major chord to create a better harmony in the field. Liking the sound he persuaded Maresch to make an orchestra of the hornists.

In the orchestra, to get the complete range of pitches, the horns ranged in size from 9 cm to 800 cm (3.5 inches to 26 feet) long. You could consider each instrument (or each player) as representing a key on an organ, and, indeed their sound is not unlike that of an organ. One person noted that on calm evenings, these orchestras could be heard as far as 5 miles away. Since metal horns could be loud, outside concerts were the rule until the late 1770s when quieter wooden horns were used. 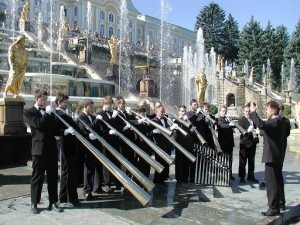 The Russian Horn Capella in front of the Peterhof Fountains, St. Petersburg

The repertoire they played covered the standard orchestral works of the time. We do have a commentary on their sound from German composer Louis Spohr: ‘The hornists executed an overture by Gluck with a rapidity and exactness which would have been difficult for stringed instruments; how much the more so, then, for hornists, each of whom blew only one tone! It is hardly to be believed that they performed the most rapid passages with the greatest precision, and I could not have conceived it possible had I not heard it with my own ears’.

The traditional horn orchestra, usually played by trained serf musicians, declined rapidly when the Napoleonic War meant many serfs were drafted into soldiers. And there was also a feeling of exploitation where the performers were perceived as being nothing more than cogs in a machine. A review of a concert in London in 1831 thought the orchestra had been faced with ‘disheartening drudgery” in learning the repertoire, and that it was only in Russia that this “ancient hereditary tyranny” could be carried on.

In 2006, this long-forgotten Russian art form was resurrected and we can hear this unique sound again.

This is the Horn Orchestra of Russia, a group from St. Petersburg that has brought this tradition to life again. Again, each player only plays one note on his horn, but as you can see from the video, they now play multiple horns alternatively. The orchestra estimates that the complexity of the scores means that it takes the 3-12 months to learn one piece of music.

This modern horn orchestra is led by Sergei Polyanichko and the group consists of 23 musicians. The full range of their play covers 4 octaves and is performed on a total of 96 instruments. In the 18th century, when these kinds of orchestras were common in Russian, they were known as “living organs” and you can hear in their performance this same kind of sound.