Artists Behind the scenes
Playin’ In The Rain
by Janet Horvath November 23rd, 2014 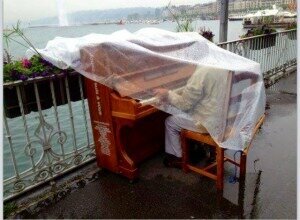 In the song Singin’ in The Rain, Gene Kelly tap-dances in the streets of Paris, splashing with joy in the downpour. Playing in the rain is another story. We definitely do not dance. Most orchestras have a few days of outdoor concerts in the summer. On a July concert evening the sky looked menacing. There was a tornado watch announced. But the orchestra had their rules. Everyone had to show up. Everything was set up. A tall, slender test-tube bottle, with lines like a measuring cup, was set out. Only if there was enough rainfall collected in the bottle, enough to reach the red line, did anyone cancel the performance.

The audience took their rickety seats. They didn’t want to miss their perennial favorites, Tchaikovsky 1812 Overture, The Stars and Stripes Forever, and the Radetzky March by Johann Strauss Senior, which begins with a stirring snare drum introduction and then everyone claps along with the music. There was a sea of colorful raincoats and umbrellas before us. 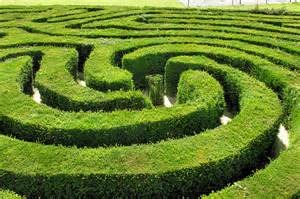 As concert time approached some musicians bravely took their seats on the erected platform, exposed to the elements. Others huddled around the little bottle shivering in the wind, watching the drops collect. Drip. Drip. Drip. Suddenly the field went dark and a tremendous boom released a deluge of epic proportions. We cradled our instruments and rushed for cover. The only shelter was in our cars, which were at the other end of the field. All the equipment—the one-hundred chairs, stand lights and music stands, overhead lights, the podium, and the platform had still to be taken down despite the storm. The bottle tipped over.

Outdoor weddings can be spectacularly beautiful in bucolic settings but the weather can play havoc. A colleague of mine who plays in a string quartet and who frequently plays for weddings told me this story. The bride and groom thought nothing could be more romantic than having their wedding in the hedge maze of a nature preserve, well away from the bustle of the city. It was a hot sticky day in August and the string quartet wore as light clothing as they could. 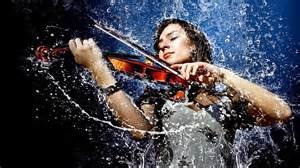 The musicians made their way deep into the maze, miles away from civilization, dragging their instruments and music stands to the center where they would perform on a makeshift parquet floor. Disoriented, they finally found a flimsy little tent that was erected to protect the wedding party from the blazing sun. The guests and musicians would be out in the open and surrounded on all sides by the eight foot tall hedgerows. No breeze penetrated.

As the procession began the weather turned suddenly. Dark threatening clouds rolled in and within minutes everyone was at the mercy of torrents of rainfall. A vehicle quickly rescued the wedding party but the musicians were left behind and forgotten. Many minutes passed. The rain was pounding and the wind was howling. In desperation the musicians took the decorative covers off the chairs—scant protection from the rain that was now buffeting them from the side. The temperature plummeted to forty-seven degrees. The shivering musicians huddled under the canopy hoping for rescue.

After what seemed like an eternity, the brave one of the group Diane, thought that there was probably no search party coming anytime soon. She decided to grope her way through the maze for help. (This was of course before cell phones.) Somehow she traced her way back through the tall hedges. By the time she reached the main tent she was trembling uncontrollably. Someone had finally remembered the musicians who were stranded in the hedges and he had his jeep fired up ready to drive back into the maze to rescue the others. 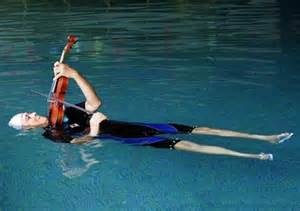 By this time the ground was soaked. The jeep got mired in the oasis of mud. Fortunately the musicians could hear the whirring of the tires. The quartet scrambled into the jeep as quickly as they could virtually throwing their instruments aboard. Liz, the violist, In her hurry to get into the jeep didn’t noticed that the gauzy panels of chiffon overlapping her slacks had gotten stuck on one of the hedges. The jeep doors were hastily slammed closed and the driver gunned the motor to dislodge them from the mud. When the car took off, Liz’s chiffon layer, waistband and all stayed behind.

The wedding party was waiting. The festivities would continue bad weather or not. No one thought to bring a sweater, mittens or a bathing suit! The quartet played with their clothing clinging to them as they shivered in the unexpectedly cool temperatures. It’s difficult to play Haydn String Quartet in C opus 76 No. 3 under any circumstance but especially so when you can hardly move your fingers. Fortunately, someone had some safety pins to keep the violist’s pants on. Planning a beach wedding? Don’t hire a string quartet.

Singin in the rain