In Tune Society
Having Sex with Ghosts!
by Georg Predota November 22nd, 2014 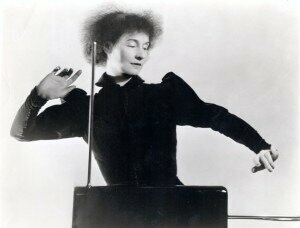 Are you ready for a bit of specialist musical trivia to impress your friends? Here it goes! What is the name of the instrument that you can see, you can hear but you can’t touch? Performing on this instrument has been likened to finger painting in space, or as one performer puts it, “it is like having sex with ghosts.” It’s the ghost reference that actually gives it away, as the instrument is predominantly associated with the spooky and eerie sounds of Halloween movies. By now you probably realize that it is one of the most unusual musical instruments ever invented, and it is named after the Russian spy and scientist Leon Theremin. The Theremin is played by moving your hands through two electromagnetic fields surrounding two antennas, with the relative position of the hands determining pitch and dynamic levels. Surprising as it may sound, the young scientist stumbled upon the concept by accident.

In 1919, the 23-year old scientist was conducting government research on a sensor that could detect the human aura. He was actually working on a gas meter to measure the density of various gases when he heard a high squeal as his hand approached the gas meter. “And when he brought his hand back to his body and away from the machine, it was a slower and lower squeal.” Theremin became intrigued and constructed a free standing musical instrument. He entertained his lab colleagues with little melodies, and by 1920 demonstrated his invention to sold-out venues across Europe. By 1928 he debut the instrument in the United States, appearing at Carnegie Hall and the Metropolitan Opera House. Once the Theremin was patented, commercial production rights were granted to RCA, one of the cutting-edge manufacturers of electronics. Of course, RCA did not realize that Dr. Theremin was also a KGB spy, charged with providing industrial espionage for the Soviet government.

Audiences throughout the world were fascinated, but because it turned out to be quite challenging to play, the instrument was not a commercial success. A number of accomplished performers, foremost among them Lucie Rosen, toured the United States. Rosen, who together with her husband founded the Caramoor Center for Music and the Arts in New York State, approached Bohuslav Martinů for a composition featuring the Theremin. Martinů, who had fled Europe in 1941 and was living in New York City, responded with his Fantasia for Theremin, Oboe, String Quartet and Piano, H.301, which premiered on 3 November 1945. The composition explores the outer edges of the Theremin’s dynamic and timbre range. Long-winding melodic lines blend and contrast with the harmonies offered by strings and oboe. Roughly 15 minutes in length, this work represents a serious technical challenge for the thereminist. A number of composers, including Edgard Varèse and Joseph Schillinger also explored the unique tonalities offered by the instrument. 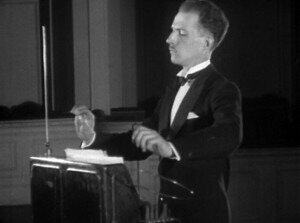 The Theremin was not a resounding success on the classical music stage. However, as early as 1931, Dmitri Shostakovich employed the instrument in his orchestral score for the film Odna. And Hollywood quickly took note. In rapid succession, the Theremin prominently featured in a number of sci-fi and horror motion pictures, including The Day the Earth stood Still, The Thing from Another World and The Ten Commandments. More recently, the Theremin sounded in the movies Monster House, Hellboy, and the British detective series Midsomer Murders. Leon Theremin thoroughly enjoyed the good life in the United States until KGB agents knocked on the door of his New York apartment in 1938. Leaving his young wife behind, Theremin vanished without a trace. Rumors suggested that he was taken back to the Soviet Union and incarcerated in a laboratory prison camp in Siberia. After the fall of the Iron Curtain, Theremin resurfaced in New York in 1991, and gently passed away two years later. Now that’s a spooky story, don’t you think?