I am in love with YouTube. I am not here to advertise for the website or extol its virtues, but I must say that without it, I wouldn’t have discovered many classical music clips, featuring great musicians and beautiful pieces from composers whose existence I had never known. 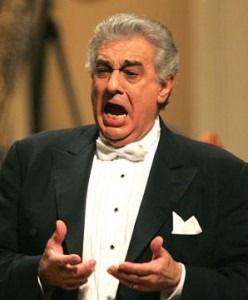 A very good friend sent me this clip of Plácido in China, with a Chinese singer, Song Zuying, and… Lang Lang.

I think as a Chinese person, one would have mixed feelings while watching this video. This is a traditional folk song, and though Song Zuying sang marvellously, she had this ridiculous outfit, which might fit the song (I can’t say for sure as I would need to go into extensive search online) but it made her look like a greeting hostess at a Chinese amusement park.

As for Lang Lang, mon Dieu! I don’t know what to say, except that he is our version of Liberace.

Why does he have to smile all through the song? There’s nothing funny or laughable, except for maybe Song Zuying’s outfit… The facial expression is just so fake and commercial, and the playing is exaggerated and ostentatious.

Although he is gifted technically, he can hardly compare with the singing of Plácido and Song because they not only have the talent, but also the expression, while Lang Lang, he has only the image (and what an image that is!)

I must say that Plácido, at the age of 69, and after extensive media coverage about his switching from a tenor to a baritone, still has THE voice, clear and strong enough, to deliver this folk song – all in Chinese, mind you.

As for Song Zuying, I think she has an amazing voice. Please listen to her rendition of Jasmine Flower, another Chinese folk song, whose melody was used by Puccini in his opera Turandot. Close your eyes, forget her dress and just listen, this is a powerful, colourful and wonderful voice, which brings you to the serene scenery of Chinese mountains and lakes.

Plácido in China with Song Zuying and Lang Lang:
Love Song of Kangding