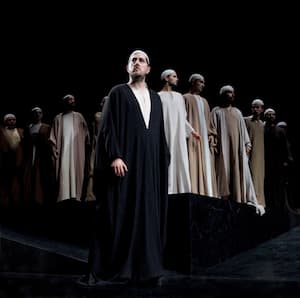 Every year, especially during Covid, one must ask oneself if it is worthwhile to make the arduous trip to the poorly connected Adriatic town of Pesaro for the Rossini Opera Festival.

This year, after a reduced 2020 program, the ROF returned in full force, with an ambitious program of rare works from the city’s most famous son. Moïse et Pharaon, from Gioachino Rossini’s late Parisian period, opened the festival. The Vitrifrigo Arena, one of the most charmless opera venues in the European summer festival landscape, provided an unexpectedly comfortable experience in the makeshift auditorium, contained and reduced by sound boards and artificial walls. The auditorium was kept at around 50 percent capacity, and the organizers devised an oversized orchestra pit that separated the musicians, all of whom were masked.

Veteran Italian stage director Pier Luigi Pizzi showed no signs of running out of ideas in this new production of Rossini’s grand opera. The sprightly 91-year-old, who has been closely associated with the epicenter of Rossiniana since 1982, made full use of the lateral and frontal ramps, frequently placing the large chorus on the sides, and bringing the singers to the front. The resulting proximity of the performers to the audience created an exceptionally intimate, thrilling and emotionally involving experience.

Pizzi, handling direction, sets and costumes worked his magic with an economical production. The sparse sets and computer animations were reminiscent of American artist James Turrell’s lights and spaces in their simplicity and impact. The costumes were straightforward but helpfully colour-coded to tell apart the Egyptians from the Israelites. The movement was targeted and meaningful.

While Pizzi was the celebrated star of the event, the evening belonged to the music. And especially to the women.

Eleonora Buratto delivered an arresting Anaï. Her sumptuous voice sparkled through the registers, she displayed extraordinarily beautiful moments of messa di voce, her trills and coloraturas were nothing short of scintillating. Her first act duet, Dieu dans ce jour prospère, with the veteran mezzo Monica Bacelli was among the finest musical moments this correspondent has witnessed in decades. 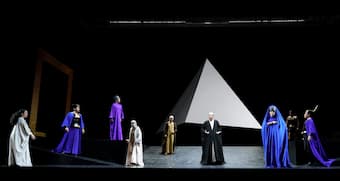 The young Siberian mezzo Vasilisa Berzhanskaya, as Sinaïde the Pharaoh’s wife, was a magnificent discovery. A 2016 participant of the Rossini Opera Academy in Pesaro, she offered some of the most fascinating vocal and dramatic moments of the evening. Possessing a true bel canto voice that comfortably encompasses contralto to high soprano ranges, Berzhanskaya is also a fine actress and attractive stage presence. Her second act Ah, d’une tendre mère écoute la prière was spinetingling. This is a rare talent that will go very far.

Italian bass Roberto Tagliavini gave his Pesaro debut in the title role of Moïse. He was vocally smooth, dramatically dominant and a convincing Moses, physically and vocally perfectly cast for the role. 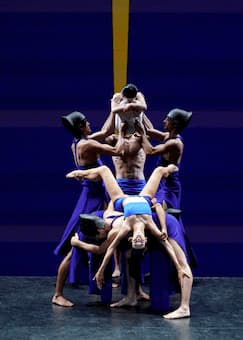 The Pharaoh, Uruguayan bass-baritone Erwin Schrott, clearly relished the part and brought his undeniable charisma to the role of Moses’ nemesis. His voice is rich and flexible, even if he doesn’t correspond to what one imagines as a bel cantista singer.

Aménophis, the Egyptian vying for Anaï, was sung by tenor Andrew Owens, who was likely indisposed and frequently uncomfortable in the high registers.

The chorus of the Teatro Ventidio Basso, since 2016 a regular feature of Pesaro (directed by Giovanni Farina) deserves special mention for their force, coordination and precision. They shone throughout the long opera, but especially during the last act prayer Des cieux où tu resides, which Rossini literally lifted from his earlier work of the same story, Mosè in Egitto.

Rossini also introduced an extensive ballet, as was custom for the French audience of the time. The two protagonists from the Ballet of the Teatro alla Scala were the most visible performers of a highly imaginative and irresistibly camp dance interlude (Choreographer Gheorghe Iancu).

The Orchestra Sinfonica Nazionale della RAI under Giacomo Sagropanti was fluid, precise and strident. The conductor, tangibly in control of events, cajoled the best out of singers and players.

This unusually intense and high quality performance clearly answers the nagging question: Pesaro, even if it consumes the better half of a day to get there, is more than worth the trip.