Blog
The Pits—Orchestra Pits That is!
by Janet Horvath April 30th, 2016

The view from the main stage Orchestra Pit at the Royal Opera House
Credit: ROH/Sim Canetty-Clarke, 2014

A good part of a musician’s career is spent in a pit, an orchestra pit that is—for opera, ballet and musical theater productions. The pit—an open space beneath and in front of the stage—varies in shape and size and can be cramped, loud, and dark, especially if it is very deep below the stage.

We can agree that without the music the show is skeletal! The musicians—a dedicated, virtuosic group who are mainly “unseen”—perform and rehearse long hours with unfailing commitment because they love the music passionately. Opera repertory is especially challenging not the least of which because it is lengthy—three hours is standard, longer in the case of Wagner’s Der Ring des Nibelungen or Berlioz Les Troyens. Some of the most successful theater productions go on night after night, even for years. The performances on the stage are, sublime, entertaining and always a spectacle. But sometimes there is more drama under the stage than on it! 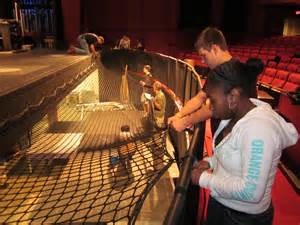 Breaking a string onstage is usually a production. If it is the principal who has broken the string a section player will switch instruments and change the string. Try that in the dark. While they rummage to get the string out of its wrapping, the loose peg might fall out clattering to the floor.

Props do fall into the pit—swords, beverages, even fruit. Edward Poremba who was percussionist of the Lyric Opera of Chicago 1966-69 and principal timpanist from 1971-2000, relates:

“It happened during one of the crowd scenes in Carmen. There was lots of mayhem onstage. Suddenly oranges came flying from the stage and into the pit – I wouldn’t say it was raining oranges, but some landed on the timpani. No musician or other instrument was involved so everyone in the area, though at first startled, had a good laugh. I don’t believe the conductor ever noticed. By the way, the oranges produced a nice round forte. A lot of people thought the whole episode should be included in future performances.” 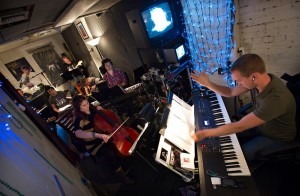 The Out-of-View Orchestras of ‘Carrie’ and ‘Spider-Man’
Credit: Joshua Bright for The New York Times

Another near miss occurred during a performance of Verdi’s Falstaff. Flower boxes lined the edge of the stage just over the heads of the bass section. Principal bass of the Lyric opera Mike Gelle remembers that when Maestro James Conlon launched into the vocal fugue at the end of the opera the soprano’s dress got entangled and one of the flower boxes crashed into the pit. Miraculously, it missed the flutes and basses by a few inches. Audience members sitting up close were horrified but the musicians—always pros—kept playing. A scrim with secure netting was installed by the next performance.

There have been several instances of pitfalls. Puerto Rican soprano Ana María Martínez fell during a performance of Antonín Dvorak’s opera, Rusalka at Glyndebourne in 2009. Her feet got caught in some netting onstage and she tumbled backwards into the pit. Fortunately she was unhurt. That was not the case in 2013. Tragically, the fall into the pit of the Perm Opera and Ballet Theatre’s director was fatal. 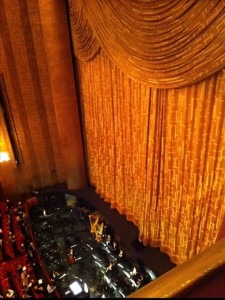 Today there are companies that specialize in netting to put over a pit to prevent such disasters. Many amateur and student groups are starting to use these and other types of barriers.

The Minnesota Orchestra season was peppered with thirteen performances of Tchaikovsky’s Nutcracker ballet annually. When the fog machines got rolling on stage we could barely see our music. The stench was overpowering as CO2 wafted into the pit. Inevitably right before the mouse battle scene a brass player, after taking a deep gulp of the concoction, would start to cough.

Fog in pit for Les Mis

I have been fortunate enough to play in the pit here in Minnesota for a mesmerizing Porgy and Bess, Gershwin’s classic opera with the Houston Grand Opera. The music was transcendent, the singer playing Crown so handsome. I couldn’t help myself. I tried to keep playing while I craned my neck to see the action onstage, turning to look over my right shoulder. My left elbow grazed the thick multi-page music score sending it tumbling onto the floor. When I leaned over to pick up the music hastily fumbling to find the right page I hid my face, which had turned crimson. This staging of Porgy and Bess was produced in 1976 conducted by John DeMain. It won a Tony award—the first opera to do so—no thanks to me.

The hope to sell more lucrative tickets has led to “remote” orchestras—a disturbing trend. Advances in technology allow for the playing to be synced even from a building down the street, as in the case of ‘Carrie’ and ‘Spider-Man’.

The Metropolitan Opera House seats 3,800. You can see how tight the quarters are in the pit but the Met orchestra’s glorious sound sweeps all the way to the uppermost tiers. The most exquisite experience for the musicians and the audience starts when the conductor lifts his baton. There is nothing like live music. Let the telepathy begin.