Composers Anecdotes
Peter Warlock: In League with the Devil
by Georg Predota May 1st, 2016 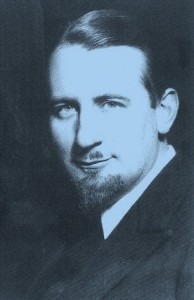 Witches, Warlocks, and Wizards are said to possess magical powers and are able to command supernatural forces. They have played an active part in human history and the imagination since ancient times. At various times in history, witchcraft and wizardry was equated with devil worship, leading to gruesome mass executions. More recently, Hollywood has given us a fanciful array of magical characters, and Wicca, a mid-20th century form of paganism forcefully advocates the acceptance of witchcraft as a true spiritual religion. We are not entirely sure what fueled Philip Heseltine’s fascination with magical and occult practices, but we do know that he took on the pseudonym Peter Warlock to publish his musical compositions. He reserved his own name for his critical and analytical writings as a British music critic, and D. H. Lawrence penned a thinly disguised and unflattering depiction of Heseltine in his 1922 book Women in Love. Heseltine was outraged and instigated legal proceedings for defamation, eventually settling out of court.

Young Philip Heseltine had an early and intense interest in music. During his years at Eton and Oxford, he developed a fixation for the music of Frederick Delius, soon to be replaced by hero worship for the Dutch composer Bernard van Dieren. Heseltine was a drifter, trying his hands in a variety of confrontational musical and editorial projects. He also tampered with the “science known as Black Magic,” and religiously practiced chants for the invocation of demons. Adopting the name Peter Warlock apparently also changed his personality. The clean-shaven, shy introvert suddenly grew a beard and became a roistering extrovert with a “pathological inability to grow up.” According to his illegitimate son, the art critic Brian Sewell, Warlock became a “sexually voracious bisexual sadist with multiple mistresses.” Apparently, he was happiest with three in his bed—either men or women. “If one of his girls became pregnant, as often they did, he simply gave them a fiver to pay for an abortion.”

Besides dabbling in composition and inflammatory music criticisms, Warlock excelled in shocking the general public. Apparently, he rode his motorcycle naked through a number of quaint English villages, and his drug parties and sex orgies became the stuff of legend! In 1915, Warlock met the young artist’s model named Minnie Lucie Canning, who on account of her volatile temperament was simply nicknamed “Puma.” The short-live love affair produced a son, and although passions had significantly cooled, the couple married on 22 December 1916. The union was quickly doomed, and Warlock focused on alcohol, mind-altering substances and uninhibited sex. He leased a cottage in the Kent village of Eynsford, and years of debauchery and uninhibited parties repeatedly needed police intervention. When Jessica Goldblatt—Brian Sewell’s mother became pregnant—Warlock tried to force her into having an abortion. Being a devout Roman Catholic, she flatly refused and “within days of a blazing row over the matter, Warlock turned on the gas, apparently committing suicide.” Warlock’s legitimate son Nigel Heseltine claimed that his father had been killed, but since Warlock had suffered from depression, the verdict of suicide was accepted. Dead at age 36, Warlock’s musical legacy includes roughly 100 songs, a number of choral works and a small number of instrumental pieces. He also transcribed Elizabethan and Jacobean vocal solo, choral, and instrumental works, and prepared an edition of Henry Purcell’s string fantasias.