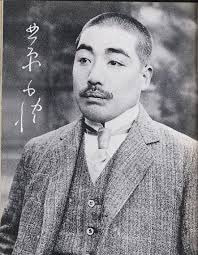 Hakushū Kitahara (1885-1942) is widely regarded as one of the most popular and important poets in modern Japanese literature. Active during the Taishō and Shōwa periods, and founder of his own literary group that included painters, musicians and actors, he rose to instant fame in the early years of the 20th century with his first book of poems, Jashumon (Heritics). Bursting with rich imagery and relying on an innovative structural organization, literary critics credited this publication for setting a completely new standard in modern Japanese poetry.

The sun at midday, distinctly warm waved
Of ether sweetly, and slowly pour against the door,
In the clouded glass there is no sound,
The scent of chloroform drips…poison in delirium…

In the distance, I hear the cacophony of trains…
…A dream of abandoned elixirs…

Time has passed painfully in the fine, downy fur of cats and
Their white swelling paws.
Under the window, unable to tremble amid the agony of life, bright red grass flowers
At the end of the damp tube
In the zinc pipe … now I anesthetize myself

In 1912, Kitahara followed up his initial success with Omoide (Recollections), evoking memories of the world from a child’s perspective. In the same year, Kitahara was arrested for adultery and placed in police custody for two weeks. Although the charges were eventually dropped, this traumatic experience changed his outlook in life and significantly altered his poetic style. Based on strong human feeling and hopes, his poetry acquired a sense of religious idealism. His first tanka anthology, Kiri no hana (Paulownia Blossoms) was followed by a number of additional anthologies including Hakkin no koma (Platinum Top), which includes one-line poems in the form of Buddhist prayers. Borrowing from his understanding of Zen, Kitahara strove for what he called “oriental simplicity.” 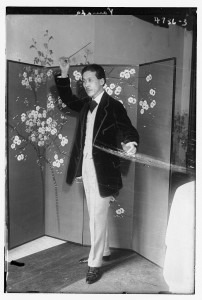 During his lifetime, Kitahara published a total of over 200 books. These included large collections of children’s poems, and as he continued to experiment with his style, anthologies inspired by classical Japanese literature. He was a member of various literary societies, and in 1935 founded Tama, a highly influential tanka magazine. Kitahara became a member of the Japan Art Academy, and he died of complications from diabetes in 1942. His hometown of Yanagawa, in Fukuoka Prefecture, continues to celebrate the life and works of Kitahara with an annual festival that includes poetry readings and music. Given Kitahara’s extensive oeuvre and legacy, it is hardly surprising that a great number of his poems were set to music. Specifically, his collaboration with Kosaku Yamada (1886-1965), one of the pioneering figures in the history of Japanese art song, inspired a number of exquisite musical compositions. Yamada studied in Berlin with Max Bruch between 1910 and 1913, and experimented with the techniques of the late Romantic Lied practiced by Mahler and Richard Strauss. Furthering his studies in the USA, he composed roughly 700 compositions, among them the song cycle Songs of Aiyan to poems by Kitahara. As the poems are written in the local Kyushu dialect, Yamada’s musical setting incorporates aspects of Japanese theatre and lyricism, lending at moments an almost otherworldly tonality to the music.