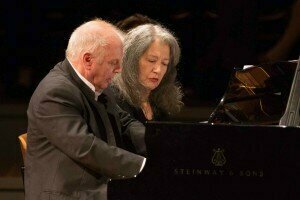 The “concert pianist” is a relatively recent creation. In the middle of the nineteenth century, a time when the technology of piano manufacture allowed piano makers to build bigger, stronger instruments, the “concert pianist” as we understand the role today, was born. The chief exponents of this were Franz Liszt and Clara Schumann, virtuoso pianists who enthralled adoring audiences and who played all the best music being written at the time and which had been written before, music which remains a major cornerstone of the classical piano repertoire, still performed today and hugely popular with audiences. Those who transmit this music to us remain the subject of great curiosity and fascination.

Pianists are special. The position of the piano on stage, stretched out across the width of the stage, parallel to the audience so that the soloist sits side on, instantly marks out the pianist as different. Other instrumentalists and singers face the audience, either as soloists or in ensemble, and thus their connection to the audience is more immediate, through gesture, eye contact and sound. Then there is the sheer size of the instrument – a modern concert grand is around three metres long and weighs several tons. An immoveable black beast, the pianist can feel trapped and limited, while a violinist, for example, can move easily around the stage, leaning out towards the audience and gesturing as they play. So the pianist must create a sense of being, of connecting with the audience – “presence” – in other ways.

In a conventional piano recital, the audience’s reactions are largely led by the sounds the pianist makes. But presence goes beyond sound, and the pianist’s physical gestures and body language are important too. From the moment the performer enters the stage, we engage with them via their body language – and vice versa. A bow, for example, is the performer’s way of greeting and acknowledging the audience, just as we applaud to demonstrate our acknowledgement and appreciation (for what we are about to hear and what we have heard). How the pianist comports him or herself at the piano can be crucial to our relationship with both performer and music, and stage presence and bodily gestures create an important channel of communication which can hold the audience captive during a performance.

A performer with “presence” has something to say and is communicating effectively, with focus, commanding the audience’s full attention
– Mark Swartzentruber, concert pianist

“Presence”, a concept derived from the theatre concerning timing, body language and communication, enables the performer to create an illusion of filling the space on the stage and communicating a very specific aesthetic to the audience. Every piece of music has its own distinct “atmosphere” or world which the performer must inhabit and invite the audience to discover. Then the performer must navigate that world and sustain the suspension of disbelief to the very end so that the performance becomes an experience lived entirely through the music and the performer’s interpretation of it. Thus, something very special and unique can happen in the sacred space of the concert hall when the performer completely commands the audience’s absolute silence and concentrated involvement. We’ve all been to concerts where something indescribable or intangible takes place: these are the performances during which we enter a state of wonder, from which we emerge speechless, hardly able to put into words what we have just heard because the experience of the performance has created a special connection (often very personal) between performer and listener, and awakened in us what it means to be a sentient, thinking, feeling, living, breathing human being.

…the most inspired performances are always those that are inexplicable from a logical point of view
– Ruth Laredo (1937 –2005), concert pianist

András Schiff – Bach. French Suite No.3 in B minor BWV814

All performers should strive for presence in performance. Very few have natural presence; it is an attribute which has to be trained, just as the music itself must be practised and finessed. To communicate effectively and to create presence, performers should be fully present, performing “in the moment”. Such a state of being comes from assiduous practising, musical knowledge, bodily awareness, breathing, managing anxiety, mental focus, ritual and routine. For the audience, this creates an immediacy, and a palpable sense of the music being created spontaneously (in fact, such spontaneity and freedom in performance comes from much intense and meticulous preparation). The audience’s perception of “presence” begins from the moment the pianist crosses the stage, and a performer who is fully present from the outset, one who takes the audience in and makes contact with them, is likely to be able to hold the audience’s attention throughout the performance (audiences can quickly sense if a performer is not fully engaged, bored, anxious, or would rather be anywhere but performing). Presence can also be determined by the audience itself through factors such as reputation and/or age of performer, venue and perceived difficulty of repertoire. Very famous and highly revered pianists such as Daniel Barenboim, Martha Argerich or Andras Schiff create a remarkable presence long before they enter the stage and play, such is their exalted status. Others create an artificial or superficial presence through ostentatious or inappropriate repertoire, flashy piano pyrotechnics and extravagant physical gestures…

This idea remains common amongst students and performers today, but feeling emotion does not necessarily translate into one’s sound, and the performer must be able to convey expression convincingly, regardless of how he or she is feeling at the time. The listener does not have direct access to or knowledge of the performer’s emotions, only what they perceive from the sound; nor can the performer access the composer’s emotions at the time of writing the music, and thus the sound alone has to convey the emotional content of the music. Again, meticulous preparation comes into play here, for deep knowledge of the music allows one to create an emotional narrative which eventually becomes internalised and intuitive. Body language has a role too, but very few audiences want to see a performer who contrives to “act out” the emotional content of the music through facial grimaces, head/body swaying or other exaggerated gestures.

Shostakovich: Cello Sonata, Op. 40
Concert programmes tend to contain a variety of pieces of differing tempi, character and mood, and the performer must move seamlessly between them, alert to their individual attributes and qualities. Retaining a sense of presence between pieces is crucial: it enables the performer to remain in the moment of the music and hold the audience’s attention and engagement with the music. Some pieces lend themselves to more space or silence between them while others encourage the performer to segue quickly from one to the next. Understanding this ebb and flow of a concert programme is crucial to shaping the narrative and energy of the entire concert. Thus, if one wishes to prolong a sense of stillness or meditation after, say, a performance of Takemitsu’s ‘Rain Tree Sketch II’, one might simply sit quietly at the piano, head bowed, hands resting lightly on one’s knees, allowing the memory of the sound to resonate in the audience’s consciousness, after the physical sound has decayed.
Occasionally one attends a concert where the performer’s presence seems so modest and yet so powerful, commanding awed silence from the audience. I felt this at Igor Levit’s final Beethoven sonatas concert at the Wigmore Hall (June 2017). Levit is not an especially gestural pianist, but his sense of quiet focus and intense concentration is more than tangible, causing audiences to lean in and listen very carefully. I cannot explain how he achieves this, only that I felt it, and at one point during his concert, the hall was as quiet as I have ever heard it. That is a supreme achievement on the part of a performer, to hold the audience in the thrall of the music, so deeply, so convincingly. This attribute may be independent of an involvement with the greatness of the music, and may focus entirely on the individual performing, or is a combination of performer and music. Fundamentally, I think such an ability comes from a deep love and respect for the music and a willingness to set aside one’s ego in the service of the music. Loss of ego brings powerful presence and creates an empathic relationship with the audience.