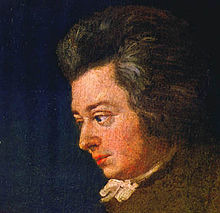 Here is a little trick question; see if you know the answer? What major composition by Wolfgang Amadeus Mozart had to wait 147 years after his death before it was performed again? The answer is truly amazing as it involves a work from his most popular genre composed during his final years in Vienna. If you said the Piano Concerto No. 25 in C major, K. 503, you would have been correct. The question we should ask ourselves then is why no pianist or conductor touched this concerto for one and a half centuries? We do know that Mozart performed the work on 5 December 1786 in Vienna, one day after having completed the composition. The very next day, Mozart took a new symphony to Prague — No. 38 in D major, K. 504 aptly nicknamed “Prague” — and conducted a performance of Figaro. There is no record of Mozart performing his new piano concerto in Prague, but he does so again on 7 April 1787 in Vienna and on 12 May 1787 in Leipzig. The very next performance of this work takes place in 1934!!! On this occasion, Artur Schnabel played the solo part and George Szell conducted the Vienna Philharmonic. It still took another decade before the work finally took its rightful place in the repertory. So what went wrong?

Piano Concerto No. 25 in C major, K. 503
However you try to look at it, in his C-major concerto, K. 503 Mozart was clearly working on something new and unique. For one, it offers unparalleled grandeur, formality and a sense of structural integrity that — particularly during Mozart’s time — was not commonly associated with the genre of the concerto. And what are we to make of the flamboyant display of learned counterpoint that permeates the outer movements? In addition, the concerto is grandly scored, including trumpets and drums but surprisingly omitting the clarinets, Mozart’s favorite instrument. In general, Mozart reserves the key of C major for his most heroic and magisterial utterances, and despite the complete negation of any deliberate virtuoso element — we are not even sure if Mozart planed for a cadenza in the first movement — it is one of his most difficult compositions to perform. These initial observations make it very obvious that this composition simply did not meet the expectations of Mozart’s audience. Surely, they must have been looking for charming melodies, a playful interaction between orchestra and soloist, humorous turns of phrases, unusual and surprising modulations, and above all, operatic lyricism. To be fair, the “Finale” does contain an adaptation of a theme taken from Idomeneo, but of course, that is “opera seria” territory. In the event, music critics, writing more than a century later, still called this concerto “frigid and unoriginal.” It is hardly unoriginal, but assertively symphonic in the opening movement — looking forward to the sonorous world of the Jupiter — and clearly operatic in the middle movement and the “Finale”, which already harbors shades of Cosi. As such, it straddles the boundaries between two distinctly different genres. According to H.C. Robbins Landon, K. 503 is situated between “the stage work in which Mozart most brilliantly and perfectly solved the structural, dramatic and musical problems which had occupied so much of his best operatic efforts,” and the concerto that “contained the essence of Mozart’s approach to the sonata form: unity within diversity.” Seen within this context, it is hardly surprising that audiences and performers alike could not come to terms with this highly sophisticated and subtle concept work. It was after all, pointing towards the future. Sadly, it was left to Ludwig van Beethoven to realize this future, specifically in terms of grandness of scale, formal spaciousness and epic character in his C major and C minor concertos, Nos. 1 and 3, respectively. Of course, Mozart might have had entirely different expectations of the concerto genre, as his final two efforts adhere to a somewhat transitional character. Be that as it may, K. 503 boldly breaks through the barriers of the highly stylized concerto form Mozart inherited, and paves the way for the incredible variety, diversity and originality of the genre in the 19th century.