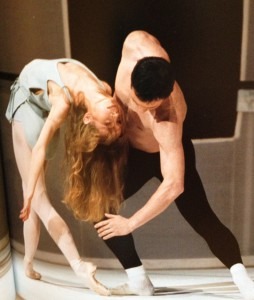 The atmosphere was electric! We were at Paris’s Palais Garnier to attend a ballet performance just five days before the one-hundredth anniversary of the riot surrounding the premiere of Igor Stravinsky’s Rite of Spring in May of 1913. To top that off, we would be seeing another world-famous work of Stravinsky — The Firebird —music that I had played countless times but had never seen danced. The excitement was palpable. To be where the ghosts of performances and premieres past was quite a privilege.

The Palais, considered one of the most famous opera houses in the world, is breathtaking. It is one of the historic emblems of Paris. The architect, Charles Garnier, was chosen to design the astonishing opera house by Emperor Napoleon III in 1861. The interior of the hall is entirely gold and marble with deep burgundy seating. The balconies and pillars are exquisitely crafted and decorated with elaborate multicolored marble friezes, columns, and lavish statuary, some of which portray deities of Greek mythology, as well as gilded bronze busts of many of the great composers. The dome ceiling took my breath away— a huge colorful fresco painted in 1964 by Marc Chagall depicting scenes from the operas of 14 composers. A gold border and small lights outline the painting. From the center hangs an immense 7-ton bronze and crystal chandelier designed by Garnier. It was difficult to stop craning our necks to look at the ceiling. Just being in this historic theater was a feast for the senses and the performance had yet to begin! 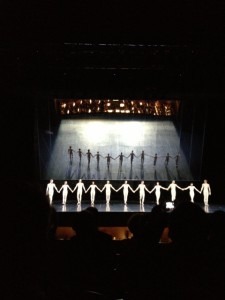 The number of performances that take place in the Palais Garnier is astonishing. It is the home of the Opéra National de Paris, which performs no less than 16 operas a season, as well as the ballet, which this season presented 14 ballets. Other series include The L’Orchestre de L’Opéra National de Paris, recital and chamber music evenings, special events and “new productions.” One could go every night of the week if one could only get (and afford) tickets. (Most events are sold out months in advance!)

But on with our evening. We were to be treated to four works. The grandiose burgundy velvet curtains parted for The Firebird choreographed by the brilliant French-born Swiss dancer Maurice Béjart — who became a choreographer and opera director and who ran the Béjart Ballet Lausanne in Switzerland. The Firebird was written for the 1910 Paris season of the Ballet Russes Company run by the irascible impresario Sergei Diaghilev. Stravinsky was a young and virtually unknown composer at the time. This auspicious debut was the beginning of the collaboration between Stravinsky, Diaghilev and the legendary dancer Nijinsky that led to the composing of the ballets Petroushka and The Rite of Spring.

The conception for this Firebird was simple: A bright red circle was the backdrop and set for the dancers dressed in red. The soloist superbly depicted the magical glowing bird that is a curse to its captor. The orchestra played beautifully. The solos within the repertory — when one individual has to play alone — are usually the most difficult to play because one has to shine like an angel out-of-the-blue. There is a quite short but notorious cello solo near the beginning of Firebird that I remember nervously fussing about. It is in a terrible key for the cello and in an awkward position on the instrument. I had to smile. I remember once I was so nervous that I counted the number of notes and said to myself “Janet — it’s only 14 notes!!” Sure enough, the cellist began a bit tentatively — there is a difficult change of position — but he sailed through the 14 notes and then some! 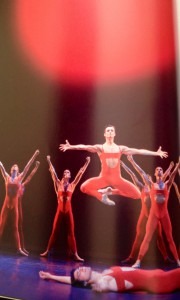 Next on the program were two versions of L’Après Midi d’un Faun – Afternoon of a Faun, by French impressionist composer Claude Debussy after a poem by Stéphane Mallarmé. The original version was choreographed by Vaslav Nijinsky 100 years ago, also in May,1912. This performance was immediately followed by a newer version — a Jerome Robbins choreography. How very stunning to see two entirely different interpretations juxtaposed. The first version featured the original costumes, set and the choreography depicting the faun foraging among rocks and foliage who then meets and flirts with several nymphs. The faun is barefoot and the subtext is overtly erotic which in 1912 proved to be as controversial as the Rite of Spring would be. The first performance was met with silence! It made history as the first “modern” ballet. The second version Afternoon of a Faun portrays a love story with modern dress and sets — the male dancer shirtless and the female lithe, once again depicting sensuality. They were both gorgeous interpretations.

The program ended with Ravel’s famous piece Boléro — again a work that I’ve played dozens of times but never seen danced. I can only say that it was amazing and mesmerizing. The “creation,” as stated in the program, was just that, as the choreographer worked with a lighting designer for a spectacular effect.

A huge mirror covered the entire back wall of the stage facing the audience. From above several spirals and corkscrew shapes of light were emitted onto the stage and reflected onto the mirror. Within the helixes whirled the dancers. We gasped from the audience as we watched the multiple reflections of the dancers. When the music increased in intensity the lighting and twirling of the dancers followed suit. As the piece came to its climax the mirror slowly tilted so we could see the musicians playing in the pit too. The reflection of the music-stand lights completed the dazzling blaze of luminescence. The multiple dimensions created by the mix of the lighting, dancers and musicians was like nothing we’d ever seen. It was truly an unforgettable evening. No wonder the Paris Opéra Ballet is and has been considered the epitome of the art!