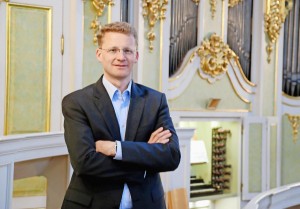 We first heard Thomas Lennartz at the helm of his old organ – the magnificent Silbermann organ (built ca 1750-51) in the Dresden Cathedral (Katholische Hofkirche). Old organ in two ways -one is its age, remembering that Silbermann had been a good friend of J.S. Bach, and old in the sense that Lennartz has moved on to become a professor of organ improvisation at the Leipzig Hochschule for Music.

In a recent conversation with him, we learned that he’d fallen for the organ as a child. His mother was a skilled organist and he quickly fell in love with the instrument – its sound and the way that he could feel the instrument as a physical presence. His older brother fell in love with all kinds of heavy metal music, but it was the heavy metal of the organ that made Thomas happy.

He first heard the music and improvisations of Franz Lehrndorfer, a Munich organist with an idiosyncratic style that resisted the usual stylistic definitions. The young Lennartz tried to imitate him but found that it was through his own musical voice that he found satisfaction. When it came time for school, the decision was between medicine, literature, or music and music won out. When he first started his study of the organ, he wasn’t sure if the disciplined life of the liturgical musician was for him – as an organist, he would always be subservient to the religious body of the church he was working in. However, after a stint of teaching, music was the better way of life. 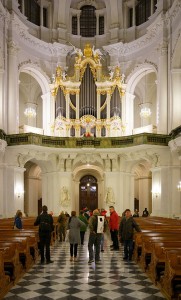 On his first commercial recording on Motette Records in 2011, he recorded not only J.S. Bach, Pachelbel, and Peeters but also included his own improvisation on ‘Nun bitten wir den heiligen Geist.’

When he teaches organ improvisation, he tries to give his students the skills and techniques for creating their own work of art. Some students excel and others flounder because the skill of improvisation takes knowledge of Romantic harmonic progressions, forms such as sonata allegro form, what happens in development sections, what are the implications of the melody, and so on. He starts his students with the improvisation they are most familiar with: cadenzas. Start with a cadenza, extend it, create a new piece from the harmonies, and use the rhythms to create your own work. Style is important as well -French Baroque music will have a different style that Italian Baroque music, for example. A successful improviser must understand form, and for church work, must also understand the chorales. In his studies, he found that the French teachers would keep their improvisation tricks secret while his method is much more transparent. 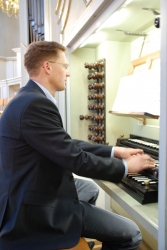 When we asked him about the Dresden Dom organ, he spoke about the way the organ fills the space. The optimal seats are in the balcony, closest to the organ. As you sit closer to the altar, the sound becomes weaker. When he plays Baroque pieces, with their elaborate counterpoint, he finds it better to play them more slowly. Playing shorter notes doesn’t help, but keeping the speed down improves on the clarity.

Although he’s a teacher now, he would like to go back to playing for church services. It gave him a constant inspiration for his improvising, even though it meant that holidays, such as Christmas, were rarely spent at home. At home, his leisure time is spent with the German literature he considered for university study, such as Thomas Mann, American authors such as Philip Roth and John Updike, and even Japanese authors such as Haruki Murakami. Art from the Romantic to the early 20th century fascinates him and he toys with the idea of learning to paint.

We found his paintings in sound electrifying – you can see where Dr. Lennartz is playing over the next few months on his website and if you’re in Germany or even in Mallorca (in November), keep an eye out for this inspiring and innovative player.