Guest Posts
Orchestra in the mall
by Zoey September 23rd, 2011 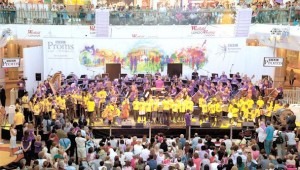 It is Proms season again. But I am not going to describe any of those splendid concerts staged at the Royal Albert Hall. I just want to talk about a free live concert held on June 21 by the BBC Symphony Orchestra at Westfield London Shopping Centre, one of the biggest in the UK.

As part of promotions for the new season of Proms Out & About, the BBC Symphony Orchestra offered a wonderful dose of classical music at Westfield London. The orchestra was joined by operatic stars and local schoolchildren, who together presented this hour-and-a-half concert showcasing world-class music.

The purpose of Out & About is to bring the BBC Proms directly to people who might not otherwise be exposed to the outdoor concert experience. With leaflets distributed by the handful and ticket offers proclaimed everywhere in the shopping centre, the concert successfully drew widespread attention in this very unlikely venue.

The music seemed to erupt in every corner of the mall as well. People stopped in their tracks to listen, breaking out in smiles and applauding. The audience in the front rows were mainly children and their parents, and all appeared to enjoy the concert a great deal.

While admiring the effectiveness of this publicity campaign, I couldn’t help but feel some sadness about the music scene in my own country. I often hear about venue managers in China complaining about how expensive it is to host Western orchestras. As a result, audiences complain about the cost of concert tickets. As if that weren’t bad enough, so-called music critics grumble about the greed of agencies, orchestras and artists. Yet these same critics never fail to request free tickets for themselves.

No one seems willing to do anything to change this situation. The cycle of dissatisfaction keeps spinning. In China, people think that running venues is merely a business; viewed this way, music is a commodity, a product. Programme planning is therefore just a matter of buying and selling. Certainly we cannot deny that all venues in the world have to find a way to survive. No one has bottomless pockets to forever fund the development of culture. We must always consider how to attract an audience.

What actually happens when an orchestra is brought in and a concert is promoted? The promoter first has to make a very hard decision about budgeting a big orchestra while turning down a lot of other good orchestras. Then ticket prices must be decided upon to make enough income to cover expenses. Finally, promoters have to persuade journalists or music critics to write favourable articles about the orchestra in order to successfully sell a performance to the public.

But with a small budget remaining for promotion and publicity, even favourable words from journalists will only go so far. Nothing can guarantee lucrative box office takings. So, with high ticket prices, every concert is a risk. Sometimes promoters are lucky; most times business is a nightmare. I often hear venue managers complain that the classical music market is really unpredictable, as if audiences are incapable of making sensible decisions.

Except for a very few top-flight orchestras such as the Berlin Phil and Vienna Phil, even many excellent companies don’t understand why promoters are reluctant to bring them back despite the adulation of their audiences. The artists think they have achieved great success, so why aren’t they invited to return? But in fact their performance may well have lost the promoter a lot of money.

Have you noticed there are rarely many reviews in Chinese publications after a concert is held? That’s because journalists and critics have already fulfilled their mission in describing the concert beforehand. When a concert ends, what is the point for a publication to write more articles about it? Space in the paper costs money.

This situation is just like other things in China: no one is thinking about long-term substantial development. All we know is that promotion campaigns cost money, free events cost money, education costs money, time costs money and the venue managers say they lack sufficient money. But where does the money go? It’s used to build the cold walls of the performance halls – not to build the inside, the hall’s soul, the culture itself.

This is the 117th year of the BBC Proms and its mission has held true: to present the widest possible range of music, performed at the highest standards, to large audiences. The Proms’ Out & About programme has been running for nine years and is just one of the BBC’s many promotional activities for the Proms.

Britain is a country that loves its traditions. Old furniture, old books, old houses, old customs, and as if those weren’t enough, they create more traditions and proudly keep them going generation after generation.

China has an even longer history and probably more traditions. But we Chinese can’t wait to break them. Everything must be new: new houses, new concert halls, new cars. And every day there is a new way to make money. Because we don’t know what the future will bring, who will next hold power and what regulations will govern us, our strongest motivation is therefore to make more money.

That is the sorrow I feel for myself and my people when I am in a foreign country, surrounded by wonderful music, the joy of children and the smiles of others. For too many of us in China, life is a gamble and music is no more than a pair of dice thrown in the game.