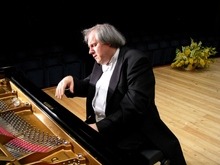 On the 3rd of August, I saw Sokolov live at the 31st International Piano Festival of La Roque d’Anthéron. What a delightful concert it was! I have heard a plethora of superlatives about the playing of the 1966 winner of the International Tchaikovsky Piano Competition. What happened after the concert? I found myself contributing to those superlatives too!

Sokolov might not be as famous as Kissin, Lang Lang, and many self-proclaimed “best of the world’s”, but he is, in my humble opinion, musically and technically more impressive than any I have heard. Sokolov does not have Kissin’s no-nonsense but formulaic bows, nor does he have Lang Lang’s egoistic showmanship on the stage. Rather, his mannerism conveys the Michelangeli type of indifference on the concert platform, almost with disdain for applause. Yet, he is not as mystic. His appearance actually reminds me more of Arrau: thoughtful and, notwithstanding his status, humble.

The programme he presented comprises two Bach, the Italian Concerto BWV 971 and the French Overture BWV 831; and two Schumann, the Humoresque Op. 20 and the Scherzo, Gigue, Romance and Fuguette Op. 32; and encores including two Brahms and four Rameau.

The Bach that he played was full of character, so much that time and again when I thought he had exhausted all possibilities, there would come another one. That feeling of surprise had become so rare after all these years of concert-going that when it happened it was no less than magical. The variety of his touch, not least in the grace notes, was boundless. To describe his remarkable and delicate articulation, I can only think of a scientific term: fractal. He brought to piano playing nothing less than a new Hausdorff dimension.

His playing was noble, elegant and full of poise. Nowhere did one feel rushed or hurried, dilated or scattered. But it did not mean the rhythm was rigid or boring. On the contrary, every note fell into the right place and then melted away like the first snow. You might want it to stay longer, but you would not really want that either. At any rate, there were more to come, in different shape, in different weight – until time was forgotten. It was that exciting and absorbing. I have never heard Bach played so well, not even by Glenn Gould.

One could of course argue that when he is exploring such new dimensions on a pianoforte, is that which he is playing still Bach? Clearly the contrast and vigour would not have been possible on a harpsichord, probably not even on an organ. I like to think of him as a calligrapher on the keyboard. He could use a dried reed pen tip with Persian blue, copying a Shakespeare’s play using modern English spelling on Greek paper. That would not make Shakespeare Lord Byron. In any case, Sokolov did not cross any line of what is popularly understood as Baroque style.

The Schumann he played after the intermission were equally outstanding. Everything remained sharp and focused, and the treble and bass balance was well kept throughout. The dynamic range he displayed was as incredibly wide as the characters he showed in the Bach. His shoulders were always relaxed and his fortissimo was never harsh, giving a full, grand majestic sound in all registers, while his pianissimo, however soft and however complex the texture, never lost tension and clarity. Multiple times when new boundaries seemed impossible, he would defy limits and establish new standards. It was a tour de force.

There were, however, insufficiencies, but they were not Sokolov’s. The first may have been the piano itself that the strings could not maintain the proper tension under Sokolov’s prowess, but it was more probable that the piano tuner did not do an adequate job. He was called out at intermission to re-tune the piano, but I could still discern some unevenness in the tone colour in the second half, especially when the soft pedal was applied, which was a shame because Sokolov had some unconventional pedalling techniques that helped bring out different texturing subtleties. The second insufficiency came from the hall acoustics itself. With modern theatrical engineering, the back end of the theatre had a control room behind glasses in the direct line of sight from the stage, in addition to a few other places such as the box seats. This made unnatural sound bouncing off the glass. This acoustics faux pas was most unfortunate, because it could be easily solved by installing curtains.

At the end of the Schumann, a thunderous applause erupted. The long, enthusiastic applause was truly deafening, such that when Sokolov eventually was obliged to play his encores, the contrasting silence made my ears uncomfortable. It was to get worse: the applause got louder and longer, as more and more people rose to a standing ovation after each encore. I found myself helplessly putting my hands together feverishly, in spite of my aching ears and arm muscles. Finally, after six phenomenal encores and with mid-night fast approaching, the passionate audience reluctantly let the maestro and the theatre staff retire.

How good was Sokolov, if I am to compare him with other famous pianists? I make no ambiguity, he is the best I have heard live. As the Chinese saying goes, good music lingers on for days. The best in the world would no doubt hang on for longer. Sokolov is an ultimate master wizard of transcendental technique and articulation. It is irrelevant to think whether the performance is worth the cost of the tickets. To see his recital live was priceless. To borrow the Michelin stars rating system, Sokolov’s concert is worth a special journey.