Artists Behind the scenes
On The Road with the SHFO
by Oliver Pashley October 4th, 2012 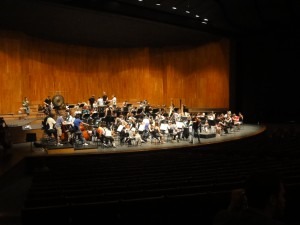 After the term of exams that university students work so hard for, the sudden summer break is seen as a vast chasm of empty time, the long summer months stretching out seemingly endlessly before the next year of education begins. For many, it is seen as an opportunity to either travel, rest, or work – be it in a job or gaining valuable work experience. Luckily for me, I found a way to combine all three.

Every year, between the months of July and August, one of the biggest classical music festivals in the world plays host to a stunning array of international artists. Founded by German pianist Justus Frantz in 1986, the Schleswig-Holstein Music Festival (SHMF) is held all over the northern German state of Schleswig Holstein, and in 1987, the Orchestral Academy of the SHMF was founded by Leonard Bernstein. Every year, after a worldwide round of auditions, an orchestra with a hugely varied international backdrop is formed, and participates each summer as part of the Festival. This year, I was lucky enough to gain a place and, spent six weeks touring around Northern Germany (amongst other places) with the Schleswig-Holstein Festival Orchestra. Here’s a look at what we got up to… 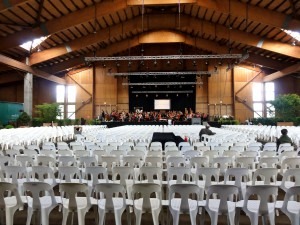 In the first week, it was evident that a lot of people were nervous – many of the musicians (myself included) knew no-one else in the orchestra before arriving in Rendsburg – the town where we were based throughout the summer – but the ice was rapidly broken, with friendships quickly formed. The nerves returned for the first rehearsal – there was an air of excitement, of apprehension, as we all arrived at our rehearsal venue to rehearse Mendelssohn’s Die Erste Walpurgisnacht with young conductor Andrés Orozco-Estrada, but as soon as the first downbeat fell, it was clear that the music making would be as fun and rewarding as the friendships that had already been made.

The basic structure of each week was rehearsals Tuesday to Friday, with two concerts at the weekend (one each on Saturday and Sunday), of either orchestral or chamber music. Rehearsals only started on Tuesdays as after the Sunday concert there was a fairly large-scale party, either at the concert venue or where we were based, so Mondays allowed us a chance to have a bit of time off, to explore Rendsburg a bit more, or to just do even more practice!

For those of us who didn’t spend the whole day recovering from the parties, there were also organised outings and activities to allow us to travel a bit further afield than the town of Rendsburg itself. These included trips to the beach, to a nearby water park, and to other concerts part of the Schleswig-Holstein Festival. Whilst the pattern of rehearsals, travel and concerts was tough, it really afforded you a social as well as musical journey; by living with like-minded people for six weeks of a fairly gruelling schedule, the friends you make really stick, and you learn a lot about the attitude needed to be a professional musician.

Our longest travel was a tour to Salzburg, to perform as part of the Festspiele (another huge festival in addition to the one based in Schleswig-Holstein). The size of the Festspielhaus seemed cavernous and extremely imposing, but our conductor for the tour, Christoph Eschenbach, really drew the best out of us, in our concert featuring Richard Strauss’s Till Eulenspiegel, Bartók’s Concerto for Orchestra and Beethoven’s Third Piano Concerto with soloist Radu Lupu. 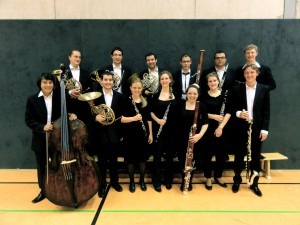 In quite a contrast to the hallowed concert halls of Austria, the venues of the SHMF were incredibly varied – indeed, before setting off for Salzburg we performed the same programme but in a tree storage warehouse! Any space, traditional or unconventional, found itself being turned into a venue for concerts – other locations ranged from a sports stadium to a stately home to a school hall… and that’s only a few of them!

Our final concerts were under conductor-composer Tan Dun, famous for his film scores to martial arts films Crouching Tiger, Hidden Dragon, Hero, and The Banquet. Here we played excerpts from the film scores with giant projections behind us, then taking the programme, along with other works by Prokofiev and Borodin, to Berlin as part of the Young Euro Classic Festival. It was a momentous way to round off the summer, playing to a packed-out Konzerthaus.

And there were even more concerts afterwards! There were a further two weeks after the Berlin tour, but as the programmes only featured music without clarinets (Schubert’s Fifth Symphony, the Mozart Clarinet Concerto and so on), we left early, along with some other wind and brass players. It was an emotional goodbye to a phenomenal summer, and having made so many friends and played such good music, it’s something which I hope to be lucky enough to take part in again in the future.