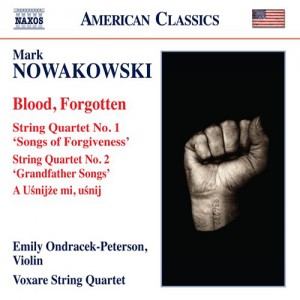 String Quartet No. 1, “Songs of Forgiveness”
I. Unmoved Movement

Nowakowski: String Quartet No. 1, “Songs of Forgiveness” – I. Unmoved Movement

The people of Poland have lived through often impossible conditions over the last three centuries, and this album is Polish-American composer Mark Nowakowski’s tribute to their spirit of survival. Songs of Forgiveness is both a meditation on anger and grief and a lamentation on the stark realities of a society riven by tragedy. Blood, Forgotten is a multimedia memorial for the victims of Nazi and Soviet aggression during World War II, the electronic soundtrack using sounds from an instrument that survived one of the concentration camps. Partly written as a memorial for Henryk Górecki, Grandfather Songs also includes the surreal element of a recording of Nowakowski’s family singing the war song Hej Ulani.