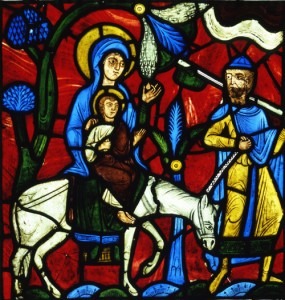 Ottorino Respighi (1879-1936) started working on his Tre Preludi sopra melodie gregoriane (Three Preludes on Gregorian Melodies) in 1919, finishing them in 1921. His wife, Elisa Olivieri-Sangiacomo, had brought Gregorian chant to his attention.

The works are not Gregorian chant as would have been recognized in the medieval period, but are more like contemplations of the church song. The first work uses the Phrygian mode, which differs from our normal major/minor modes by moving the half-steps. In a regular C major scale, the half-steps are between notes 3 and 4 (E to F) and 7 and 8 (B to C). In a Phygian scale built on C, the half-steps are between notes 1 and 2 (C to D flat) and 6 and 7 (G to A flat). You get the same affect if you are playing a C major scale (all white notes), starting on D rather than C. 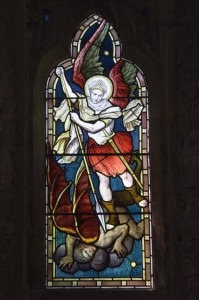 The final prelude is performed against a repeated note, adding to its contemplative nature.

III. Lento
After completing these works in 1921, he revised them in 1926 for orchestra, adding another movement onto the end. These were his Vetrate di Chiesa (Church Windows), which he subtitled as ‘Four Symphonic Impressions. It’s interesting to listen to these pieces after hearing the piano versions because you can get a real feel for the artistry Respighi brought to the orchestration.

It was only after he finished them that Respighi and his friend, literature professor Claudio Guastalla, sat down to decide on the titles. The stately beginning of the first movement suggested a chariot and so they got to the “The Flight into Egypt”.

Respighi: Church Windows: I. La Fuga in Egitto (The Flight into Egypt) (Philharmonia Orchestra; Geoffrey Simon, cond.)
The militaristic second movement brought to mind a battle in the skies, and the two men thought of the battle between Michael Archangel and his angels and the dragon and his angels (the dragon’s side lost) told in the book of Revelations. When you compare this orchestral battle with the one fought simply on the piano, you have a new appreciation of the depth of sound possible with an orchestra! 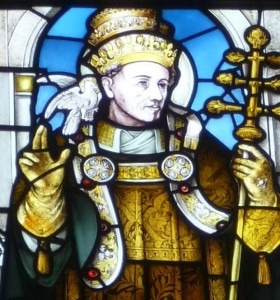 The third movement, with its repeated note, brought to mind the story of St. Clare, brought by angels from her sickbed to Church to hear Matins. The primary sound of the orchestra, as a strong contrast to the battle in the 2nd movement, is now balanced between the winds and the harp, bells, and celeste.

III. Il Mattutino di Santa Chiara (The Matins of St. Clare)
We close with the new piece written for this symphonic work: a grand evocation of the saint associated with Gregorian chant, St. Gregory the Great.

IV. San Gregorio Magno (St. Gregory the Great)
This isn’t programmed music, because the titles and images were given to the work after its creation. It is some of the most interesting modern music based on Gregorian chant that we have, however.