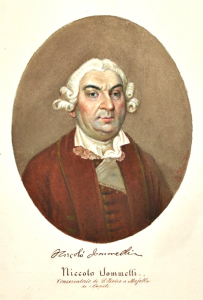 When Niccolò Jommelli died on 25 August 1774 in Naples, the composer Gennaro Manno organized a magnificent funeral attended by the most prominent musicians and writers in the city. However, since Jommelli was considered one of the most important and respected composers in all of Europe, news of his death also stunned the entire musical community on the continent. To be sure, condolences and obituaries appeared in all major European newspapers. Jommelli originally hailed from the town of Aversa, but he had learned his musical craft in Naples. Since the four conservatories in town attracted students from all parts of Europe, Jommelli was able to participate in the creation of a musical style that would eventually become known as the “Neapolitan School.” Throughout his illustrious career, Jommelli composed 82 operas for the theatres of various Italian cities, and by 1755 he was appointed chapel-master at Duke Karl Eugen von Württemberg in the city of Stuttgart.

Jommelli gained his appointment on the strength of a highly personal musical style that combined his incredible melodic gift with the structural clarity and soundness of northern European models. Unique to Jommelli’s style was the appearance of declamatory elements in arias, audacious harmonic progressions and frequent modulations. During his stay in Stuttgart, Jommelli was in charge of one of the finest orchestras in Europe. As such, he consciously explored the orchestral resources at his disposal, and graduated the orchestra from its traditional role as accompanist to an equal partner in the musical discourse. Although primarily known for his operatic productions, Jommelli also composed a large number of sacred pieces. Taking his bearing from the Neapolitan tradition where the opera and the sacred coexisted successfully, Jommelli highly successfully blends elements of theatricality with monody. His sacred output touches all genres practices at his time and includes masses, motets, graduals, sequences, offertories and a requiem.

Niccolò Jommelli: Requiem
Jommelli composed his Requiem in 1756, shortly after his arrival in Stuttgart. The work commemorates the recent death of the Duchess von Württemberg, mother of Karl Eugen. Searching for coherence and a sense of religious pathos, Jommelli scored the entire Requiem in the key of E-flat major. This choice of a seemingly monotonous tonality together with sensitive musical characterizations of the dramatic, affective and pictorial aspects primarily served the expression of the text. But it was actually Jommelli’s imaginative orchestration that balanced the constancy of tonality and gives the piece variety and expression. After a performance in Lisbon in 1787, the English writer and amateur musician William Beckford wrote, “The high mass of Jommelli, this famous composition which begins with a movement indicative of the tolling of bells. It closed with the “Libera me Domine de morte aeterna.” These deep majestic sounds mingled with others, like the cries for mercy of unhappy beings, around whom the shadows of death and the pains of hell were gathering, thrilled every nerve in my frame and affected me so deeply that I burst into tears. My knees knocked against each other, a cold sweat moistened my forehead.”

The Requiem was Jommelli’s most famous composition. The work exists in more than 80 manuscript copies spread over Europe, and it had several editions in the late eighteen and throughout the nineteenth centuries. In the words of an eminent scholar, “it was without doubt the eighteenth century’s favorite requiem, occupying a position that would belong in the nineteenth century to Mozart’s work.”

The Requiem will be performed at the Valetta Baroque Festival on 29 January 2016 by the Ghislieri Choir and Consort.