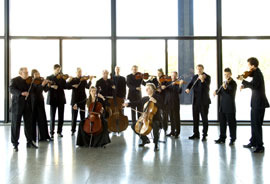 The Berlin Barock Solisten (The Berlin Baroque Soloists) are coming to Hong Kong and this very interesting offshoot of the Berlin Philharmonic brings a top-level Baroque ensemble that also carries a modern top-level orchestral sensibility.

We spoke recently with Raimar Orlovsky, the managing director of the BBS and asked him a few questions about the group and its programming. This isn’t their first trip to Asia, they’ve already been all around the region: Japan, Korea, and Singapore, among other places, have been part of their travel, but it is their first trip to Hong Kong.

The BBS was founded in 1995 following extensive exposure to Baroque music as a part of the Berlin Philharmonic’s regular concert season. Knowing the strength of the other Baroque ensembles already on the market, the BBS rehearsed for a good two years before they played their first concert. They don’t follow the strict “authentic” line pursued by other Baroque ensembles but temper the use of instruments of the period with their own sensibilities about the music and performing practice.

They follow a tenet given to them by Nikolaus Harnoncourt: “Historically informed playing starts in your mind, not only by using period instruments.” The BBS players use baroque bows and gut strings (partly), to help them capture the Baroque aesthetic, but they also will use their “fantastic Italian string instruments to realize this unique sound and refreshed articulation.”

The BBS concert in Hong Kong will be a full performance of all six of Bach’s Brandenburg concertos in one concert. As we know, Bach wrote these concertos each as a one-off, using the musical resources he had at hand in Köthen in 1721 before he sent the six pieces off to Christian Ludwig, Margrave of Brandenburg-Schwedt. Although they are always referred to as a set, they are, in fact, a six separate concertos each requiring a different set of soloists. One concerto, in fact, doesn’t even have any violins in it. The BBS reported that it took some years of planning to create this concert, not the least because of the number of players needed. They are using the concert as the crowning project celebrating their 20th anniversary season.

Bach: Brandenburg Concerto No. 5 in D Major, BWV 1050: I. Allegro (Emmanuel Pahud, flute; Berlin Baroque Soloists; Rainer Kussmaul, Conductor)
We talked about some of the particularly difficult and puzzling parts of the concertos. Concerto No. 2, with its extensive part for natural trumpet, was written for the clarion virtuoso of Bach’s time, Johann Ludwig Schreiber. The trumpet part is still considered one of the most difficult in the entire repertoire, and the BBS player, Reinhold Friedrich, one of the founding members of the BBS, will have the advantage of taking on this piece with a valved trumpet. Concerto No. 3 has one of the most curious second movements in Baroque music. Second movements are generally slow adagio movements, sometimes used to give the solo performers a bit of a rest. Bach, however, simply wrote a single measure with the tempo indication of ‘Adagio.’

Some ensembles put in an extensive improvisation here for the harpsichord or the violin, or even insert movements from other Bach works that close with the same chords Bach wrote here. The BBS, however, will take it as Bach wrote it – 2 chords and then start the third movement, seeing it as the perfect bridge between the first and third movements.

We’re happy that they’re here in Hong Kong to celebrate their 20th anniversary year with this challenging concert – the rest of their summer season will include appearances at three summer festivals in Germany in the month of July with the English violinist Daniel Hope. At the end of the year, their official Anniversary Concert will be held at home in Berlin, featuring three of their members who have been with the ensemble since its founding.

The Berlin Baroque Soloists will be performing in Hong Kong on May 17th 2015.