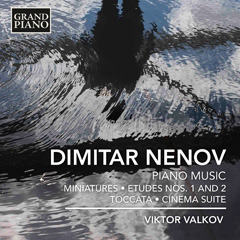 Dimitar Nenov was a leading figure of early 20th-century Bulgarian classical music. The entire range of his solo piano works is covered on this recording, from the austere and dissonant Cinema Suite to the romantic Etudes and exquisiteTheme and Variations in F sharp major. The highly chargedToccata is Nenov’s most popular work, while Fairy Tale and Dance, his last work for piano, is the most distilled example of his art.