In his farewell production after a six year tenure as Director of Opera at Covent Garden, Kasper Holten managed a veritable hat trick. He turned Wagner’s notoriously overlong opera (at nearly five hours it is possibly the longest single opera) into a thrilling, thought-inspiring and stimulating evening. He completely dispatched the classic clichés of Bavarian townsfolk, setting the story in a modern club (Mia Stensgaard) where membership is a prized possession. Yet, traditions – good and bad – are never far away. The master singers assiduously enforce their codes, women are objects the men can trade like chattel, and only Hans Sachs is able to manage the fine balance between tradition and modernity.

The first act worked flawlessly, introducing even the lesser master singers so effectively, they took on recognizable personalities. Beckmesser, the craven town clerk, was brilliantly acted and sung by Johannes Martin Kraenzle. His comical timing and mimicry was masterful, his singing impeccable. This Beckmesser’s arc from ambitious lech to failed suitor and ultimately humiliated old man was hugely nuanced and ultimately touching.

He presented a powerful counterpoint to the upstart hero Walther von Stolzing, who desperately tries to gain Eva Pogner’s hand, while struggling to accept the norms and rules imposed by the master singers. Welshman Gwyn Hughes Jones delivered vocally as von Stolzing, but director and costume designer (Anja Vang Kragh) did him no favors by dressing him up to look like a homeless vagabond, complete with stringy hair, dirty overcoat and knapsack. The couple of Eva and Walther looked unlikely and poorly matched. 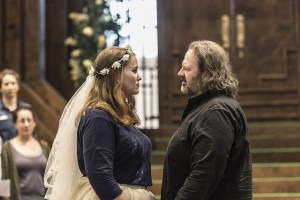 Eva was portrayed by American soprano Rachel Willis-Sorensen. Vocally superb, it was hard to fathom how such an accomplished singer would be relegated to mere object of the traditionalist meister singers. In a most unusual twist, Holten does not unite the young lovers in the final act, which both of them had been pining for during the last five hours. Holten makes his von Stolzing reluctantly embrace the master title and responsibility, while forgetting about his bride to be, who then rushes forlornly to the back of the stage, opening up the doors, letting in the symbolic light of new ideas. Respected women, alas, are not part of that new world order.

And pulling these disparate characters together is Hans Sachs, cobbler as well as poet and master singer, in addition to fixer, manipulator and protective father figure for the citizens of Nuremburg with a serious crush of his own on the young Eva Pogner. Recently knighted, Bryn Terfel was the only global star of the cast, but proved an exemplary ensemble player, never exploiting the cult status he clearly enjoys at Covert Garden. He portrayed a sensitive and humane Hans Sachs, more of a tormented widower than the all-knowing and nearly haughty town elder of more common productions.

The dramaturgical consistency started creaking in the second act, where the director opted to keep the scene in the club setting, or at least partially. But logic was lost when Sachs sits in his dinner suit and starts working on cobbling the shoe for Beckmesser on a makeshift workbench placed on the set dinner table. 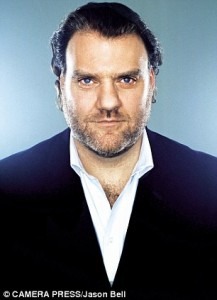 Likewise, the elopement scene between von Stolzing and Eva failed to launch on account of the awkward and clumsy staging. Nothing was added by von Stolzing graffiti-painting Richard Wagner’s exhortation to his children “Kinder, schafft Neues!” (children, create new things!), not least due to the grotesque typo the Welsh singer committed. Not something one would expect from an aristocrat and up and coming poet.

The town riot scene, which sees Beckmesser manhandled amid the cacophony of a stag night, slides into the surreal with the gratuitous conjuring of a scene from a Midsummer’s night dream, with the night watchman transformed into a hoofed zephyr and the men sporting massive exposed phalluses, which they then deploy on the transmogrified women. An odd choice of imagery, particularly after the abuse that Katharina Wagner garnered when she used the phallus images to similar effect in her widely panned 2007 Meistersinger in Bayreuth.

The third act moved to the actual rear view of the stage set, complete with hydraulics and exposed electronics, at which point the chasm between text and stage set became irreparable. It’s hard to see the point of Hans Sachs instructing his apprentice David Pogner to close up his shop when he’s sitting in that setting, framed by the Meistersinger costumes.

The final singing competition scene again takes place in the club, where suddenly the imagery falls back into place again, giving the Royal Opera House chorus the perfect staging to demonstrate their enormous accomplishment. This chorus remains one of the finest of the main opera houses.

The smaller roles were brilliantly cast, with Stephen Milling as Veit Pogner (who so graciously offers up his daughter in addition to his wealth to the next winner of the master singer’s contest), Allan Clayton as David, Hanna Hipp as Eva’s consort Magdalene and a noteworthy Sebastian Holecek as Fritz Kothner.

Antonio Pappano proved that he excels not only at the Italian repertory, but also at this massive Wagnerian challenge. He elicited a smooth and satisfying sound from the orchestra, retaining a keen eye on the rhythmic and dynamic energy that Wagner demands.

In spite of the 4pm starting time on a balmy spring Saturday, the house was sold out and enthusiastic. Holten can look back on his last production in London, knowing he has produced something close to a Meisterstueck.