Composers Inspiration
Where Did the Name Come From? Musical Names and Nicknames I
by Janet Horvath September 20th, 2015 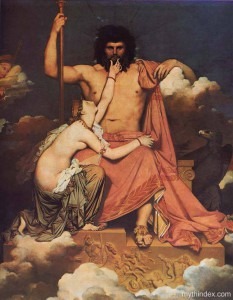 Moonlight, Eroica, Jupiter, Unfinished, Clock, Four Seasons, New World— have you wondered how certain pieces of music got their names so ubiquitous you can probably guess the works and identify the composers? Classical music can be divided into those that were numbered, usually sequentially, by the composer and over time a moniker stuck, given by someone other than the composer; and works that were given their titles by the artist themselves. Operas, ballets, choral works, symphonic poems and overtures, which were named because they are associated with a story are in a third category.

Most classical music isn’t literally about anything and unlike a song has no lyrics, or specific meanings. The content is purely abstract, without attempting to tell a story. Music, especially in the classical era (1750-1820) and earlier was numbered and named in stylistic groupings such as symphony, concerto, sonata. For Bach, Vivaldi, Haydn, Mozart, Schubert, Mendelssohn, Beethoven, (the harbinger of the romantic era,) naming a piece of music was the exception rather than the rule. Here are a few:

Haydn
Symphony No. 101 in D Major, Hob.I:101, “The Clock”
II. Andante
Many of Haydn’s works have nicknames. The ‘Clock’ Symphony No. 101, one of Haydn’s most beloved works, was written especially for a trip to London. As one might expect, the nickname is due to a rhythmic pulse in the second movement, the sound just like the ticking of a clock, which is produced by the bassoon and strings. Haydn named only two of the 104 symphonies. Perhaps the monikers—Farewell, Surprise, Drumroll, and lesser-known titles, The Bear, The Hen, The Schoolmaster, (no association meant)— help us keep track of them! 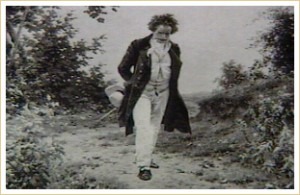 Mozart
Symphony No. 41 in C Major, K. 551, “Jupiter”
IV. Molto allegro
The 41st and last symphony of Mozart seemed to audiences to suggest the exuberant energy and grandeur of Jupiter, king of the gods in Ancient Rome. It is unlikely that Mozart heard his final work. The name is attributed to Mozart’s publisher—probably, as occurs today, a marketing tool. But the name stuck, perhaps because the work was so regal and impressive. By 1823 the image of Jupiter, the god, seated on a throne surrounded by clouds, appeared on the title page of the music.

Weather inspired many composers. The most famous and decisively programmatic of them all is Vivaldi’s Four Seasons. Published in 1725, the concertos for solo violin and strings are in a fast-slow-fast series of movements each inspired by a sonnet, for example:

Spring:
“Spring has come and joyfully the birds greet it with happy song, and the brooks, while the streams flow along with gentle murmur as the zephyrs blow. There come, shrouding the air with a black cloak, lighting and thunder chosen to herald [the storm.]”

Winter:
“Trembling with cold amidst the freezing snow, while a frightful wind harshly blows, running and stamping one’s feet every minute, and feeling one’s teeth chatter from the extreme cold.” 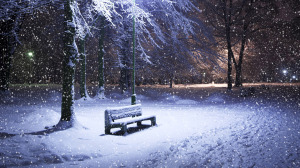 Beethoven
Symphony No. 6 in F Major, Op. 68, “Pastoral”
I. Awakening of Cheerful Feelings Upon Arrival in the Country: Allegro ma non troppo
Beethoven was also stirred by the weather. He spent many an hour walking in the woods alone and he included birdcalls, a furious storm and a gurgling brook in his Symphony No. 6. But he was reluctant to write programmatic music, “The whole work,” he insisted, “can be perceived without description – it is more an expression of feelings rather than tone-painting.” In the case of this work, Beethoven bestowed the title— Pastoral Symphony, or, Recollections of Country Life.

Beethoven
Piano Sonata No. 14 in C-Sharp Minor, Op. 27, No. 2, “Moonlight”
I.Adagio sostenuto
His works inspired quite a number of nicknames. The Sonata No. 14 in C-sharp minor Op. 27 for piano was given a name by Beethoven— Quasi una fantasia – “almost a fantasia”, which emphasizes the unique structure of the piece. Sonatas typically began with a fast movement with two themes returning to the first theme by the end of the movement. Beethoven’s title gives us a hint of the ensuing rebellion and breaking out of the mold. But it was music critic Ludwig Rellstab, who gave the work the plaintive title with which we are more familiar—Moonlight Sonata, five years after Beethoven’s death. 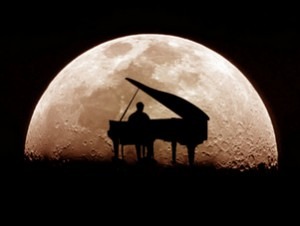 Beethoven
Symphony No. 3 in E-Flat Major, Op. 55, “Eroica”
I. Allegro con brio
Beethoven intended his third symphony to be entitled the Bonaparte Symphony. The French Republic had just been formed and Beethoven was in favor of returning to a sense of order and stability similar to the government of Ancient Rome. Napoleon seemed to be a principled, ethical leader. But when he declared himself Emperor, Beethoven seethed, “So he is no more than a common mortal! Now, too, he will tread under foot all the rights of man, indulge only his ambition; now he will think himself superior to all men, become a tyrant!” And with that Beethoven ripped his title page with the dedication to Bonaparte, into shreds, renaming the symphony Eroica, the Heroic Symphony.

Beethoven
Piano Concerto No. 5 in E-Flat Major, Op. 73, “Emperor”
I. Allegro
Considering these sentiments, it is doubtful that Beethoven would have endorsed naming his Piano Concerto No. 5 in E-flat major, The Emperor, however the nickname captures the grandeur of the work. John Baptist Cramer, who first published the work in England, is believed to have coined the name.

Schubert
Piano Quintet in A Major, Op. 114, D. 667, “Die Forelle” (The Trout)
IV. Tema con variazioni
Die Forelle, one of Schubert’s most famous but captivatingly simple songs, describes a fisherman trying to catch a fish. The piano part imitates the bubbling mountain stream. Schubert begins the fourth movement of his magical Piano Quintet in A major with this song, which he develops into an inventive set of variations. The Trout is a logical nickname.

Tchaikovsky
Symphony No. 6 in B Minor, Op. 74, “Pathetique”
IV. Finale: Adagio lamentoso
Did Tchaikovsky have a premonition that he would die in 1893, four days after the first performance of his Sixth Symphony the Pathétique? Audiences were shocked at the beloved composer’s sudden demise. The symphony, although completed only two months earlier, had been sketched out several months prior. Translations, not always accurate may have added to the confusion. In French, pathétique means poignant, or despairing and Tchaikovsky’s Russian title Patetičeskaja, translates as impassioned or ardent.

What’s in a name? In part II we will examine deliberate, dramatic programmatic titles.