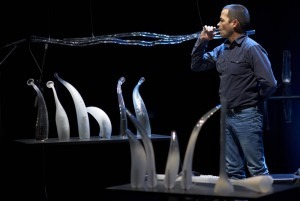 You clean your own glass instrument at home by taking a wine glass, moistening your finger, and rubbing it around the edge until the vibration can be heard. The size of the glass and the amount of liquid in the glass will determine the pitch. Now imagine that as a full keyboard.

The first ‘glass harmonicas’ were made by standing a number of glasses on a table and filling them with water to make the correct pitch and rubbing them individually. It was the American inventor Benjamin Franklin, however, who discovered a way to make it all easier.

In 1762, he created the ‘Armonica,’ named so for its harmonious sounds. He had glasses of different diameters blown, each corresponding to a note. He then fitted the bowls into each other, but not touching, and linked them by a spinner rod in the middle. The rod is turned via a foot pedal, the glasses spin, and so you can use all 10 fingers to play. 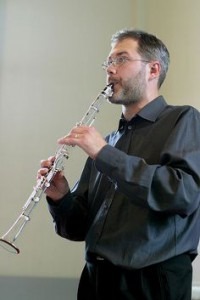 This new sound captivated composers immediately and over the 70 years that the instrument was popular, more than 400 compositions were written for it. It’s estimated that around 4,000 of the instruments were built.

Mozart heard the instrument and was reported by his father to have played it. He also wanted to get one himself. He wrote two works for the novel instrument, the Adagio, K. 356, and the Adagio und Rondo, K. 617, his last piece of chamber music. For the first performance, Mozart himself played the viola part. 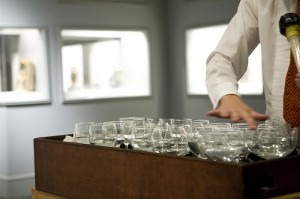 Glasses on a table 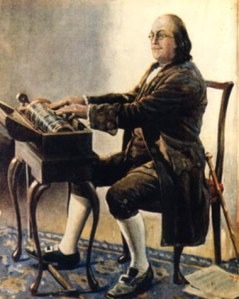 Franklin and his armonica

Beautiful as the instrument was, it carried a dangerous reputation. Paganini declared it to be a celestial voice but others declared its timbre to be so melancholy that it could plunge even the strongest man into a faint after only an hour. It was an unfortunate truth that many of its early performers ended their lives in mental hospitals. The Viennese hypnotist, Franz Anton Mesmer, used it in his medical treatments but in one celebrated case, when he cured a pianist’s blindness but caused her to go mad through treatment with the instrument, that he was forced to leave Vienna. 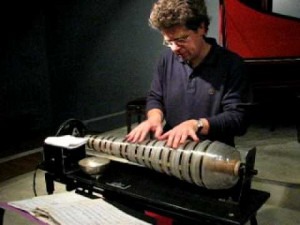 It was these rumors of madness that caused the instrument to go out of favor and even caused it to be banned in one German city. It was more probably the close association of the players’ fingers with the lead in the crystal glass that was causing the problems and this has been solved by modern makers.