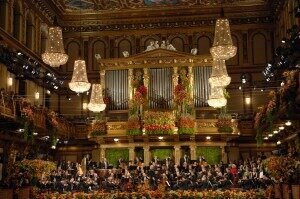 In the morning of New Year’s Day 2015, roughly 60 million viewers in 90 countries worldwide will turn on their television to watch the New Year’s Concert of the Vienna Philharmonic. That kind of marketing success is normally reserved for people who in one form or another chase after a ball! Regardless, viewers are treated to an exceedingly light and saccharine musical fare broadcast from the Golden Hall of the Viennese Society of Music. Ballroom music by members of the Strauss family and others is typically augmented by scenic ballet presentations. Members of the Vienna State Opera Ballet frolic through famous buildings or the picturesque Austrian countryside in costumes designed by Vivian Westwood and other fashion greats. To be honest, growing up in Austria, I was never much enthused about being taken to this fairy tale of musical kitsch. And having lived abroad for almost a quarter century, I still find the whole concept somewhat embarrassing. But then again, if 60 million people enjoy this kind of musical escape from reality—not unlike a visit to Disney Land or some modern gladiatorial combat around a basketball arena or football pitch—at least it appears to have some entertainment value. Yet some parts of the classical music establishment are once more in a hissy, because the planned inclusion of Jean Sibelius’ Valse triste on the 2015 New Year’s Concert has been cancelled.

We all know that the New Year’s Concert of the Vienna Philharmonic has a rather checkered history, which is hardly surprising as it originated as an instrument of state propaganda during the Austrian Anschluss. In addition, the orchestra still continues to actively resist including a representative number of women players—not just the odd female for hire—on its regular roster. This has led to extended demonstrations abroad, and legal challenges brought by the Austrian Green Party at home. Since sexual discrimination is illegal under Austrian and European law, the orchestra was penalized with a huge funding cut; it is rumored that these funds have somehow found their way back to the orchestra, however. The matter is somewhat murky since the Vienna Philharmonic is private members club—not unlike the Augusta National Golf Club in Atlanta, Georgia—yet nevertheless receives underhanded governmental subsidies and huge revenues from television rights and sponsors. 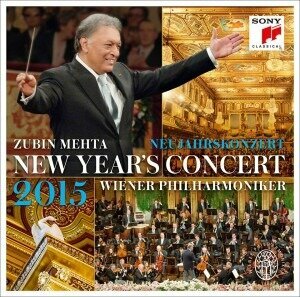 The New Year’s Concert is a cultural construct, and so is the Vienna Philharmonic. As such it was never intended to be a realistic representation of society or modern Austrian values. I am sure some people are walking the streets of Disney Land counting the number of bisexual Asian characters, but most of us do recognize that it is a simplistic world of make-belief. And when audiences storm the cinemas this holiday season to watch the final episode of the Hobbit, I am sure they are aware that orcs, fire-spitting dragons and all-powerful wizards reside in fantasy only. Suspension of disbelieve has, after all, been one of the most powerful aspects of the visual and performing arts throughout human history. And so it seems that Sibelius’ sad four-minute waltz simply did not fit the cotton candy imagery that the Vienna Philharmonic envisioned for the 2015 New Year’s event. It certainly is not a question of being disrespectful to Sibelius—we celebrate the composer’s 150th anniversary of his birth in 2015—as his works will feature on the orchestra’s tour to Finland a bit later this year.

What is troubling, however, is that the orchestra has cited excessively high fees charged by the publisher as the grounds for the withdrawal of the work. Why this silly subterfuge from one of the richest orchestras in the word? What is so difficult about saying that it simply does not fit the program concept for a particular event? The uneasy answer can only be supposed by the notion that the orchestra itself actually believes to be a personified part of the glorified cultural construct they are creating. The college student donning a Mickey Mouse mask and giggling uncontrollably for hours on end does not actually believe to be Mickey Mouse, at least I hope not. For one, the orchestra needs to stop making feeble excuses for their choice of repertory. I don’t see the LSO apologizing for not scheduling works by Bright Sheng or the New York Philharmonic neglecting Giorgio Ghedini on the 50th anniversary of his death. Given the daily atrocities committed around the world, we might indeed be thankful that the orchestra does take us, at least for a short period of time, into the magical world of the musical fairytale. However, it is high time to recognize that this enchanted word is, and always has been, confined to the concert hall. You don’t have to take my word for it, just take a short walk after the Viennese New Year’s Concert across the adjacent Karlsplatz—the center of the Viennese heroin trade—and you will quickly realize that reality looks decidedly different.