Playlists
Music Under Quarantine
Nose to the Grindstone
by Georg Predota April 18th, 2020 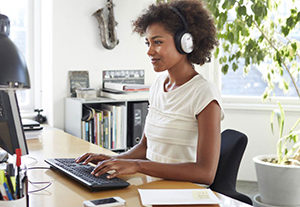 There are always two sides to everything, and that includes working from home. Some people greatly prefer a 40-hour week in the office, while others believe they are happier and more productive at home. Ever-evolving technologies have made it possible to say good-bye to the office full-time, and Covid-19 has made it a necessity. Of course, businesses have recognized the financial benefits of you staying home and are very happy for you to be part of a distributed workforce. And did you know that listening to music in the workplace boosts productivity and happiness? According to experts, orchestral or classical music provides steady and precise inspirations. It is said that mathematicians are 12% more accurate in solving problems when listening to classical music. So we’ve put together a playlist that will keep your work performance from home at the optimal arousal level, all starting with a bit of Schubert.


The 3rd Symphony by Tchaikovsky is a unique symphonic essay. It is scored in the major key and unfolds over five movements. It is one of the composer’s freest and most fluent orchestral scores as it juxtaposes academic conventions with fanciful and relaxed dances. Tchaikovsky incorporates a high degree of motivic and polyphonic intricacies, and the magical sound emerges from a combination of capricious rhythms and the fanciful manipulation of musical forms. I can see your productivity going through the roof already. 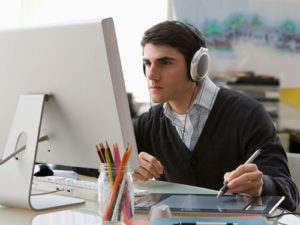 Gustav Mahler famously described his 4th Symphony as representing the sky, “whose uniform blue occasionally darkens yet always reemerges fresh and renewed.” Yet, the process of putting this masterwork together involved a lot of hard work. Mahler had earlier composed the Finale. Now he had to plan the symphonic narrative backwards, starting with already existing Finale and composing preceding movements that thematically and aesthetically were to build on the musical and philosophical materials originating in the childlike vision of heaven. It goes to show that sometimes it takes a little different strategy to get the work done properly.


Johannes Brahms habitually composed during the warm summer months, and in 1883 he found a little studio in the town of Wiesbaden overlooking the Rhine River. Apparently, Brahms was in a very good mood as he completed his 3rd Symphony in a matter of weeks. Clara Schumann heard “the mysterious charms of woods and forests in the first, with worshippers kneeling about the little forest shrine in the second movement, respectively.” In his most personal symphonic essay—filled with conflicts and warm resolutions, turbulence and gentle sentiment, desolation and geniality— Brahms looked back over his life and crafted a work that offers a compelling and highly revealing musical self-portrait.

In German consciousness, the Rhine River signifies wide-ranging cultural symbolism, including a number of musical metaphors. Composed in November 1850 at the beginning of his tenure as municipal music director in Düsseldorf, Robert Schumann completed his Third Symphony in just over a month. Since Düsseldorf is situated on the famously scenic Rhine River, the nickname “Rhenish” quickly attached itself to the work. Although the moniker did not originate with Schumann, he remarked, “I wished popular elements to prevail here, and think I have succeeded.”


It may come as a surprise, but Beethoven wrote his 5th and 6th symphonies at roughly the same time. In the enormously popular “Pastoral Symphony,” Beethoven creates a musical universe where gentle repetitions and the imitation of nature defines the structure on a small and large scale. And Beethoven described the “Pastoral Symphony,” as more an expression of feeling than painting. Although our familiar picture of Beethoven as the deaf curmudgeon slumped in total absorption over his sketches does not easily allow for Beethoven the nature lover, he liked nothing more than a good walk in the woods!


When Jeanette Thurber invited Antonin Dvořák to America, her plan was to establish a uniquely American school of classical music composition. Native American and African-American music immediately fascinated Dvořák, and his 9th Symphony sounds respective influences of spirituals, Creole tunes, Native American dances and literary/musical devices—including Henry Wadsworth Longfellow’s epic poem The Song of Hiawatha. While scholars are still debating the “authenticity” of Dvořák’s “Symphony from the New World,” the composer did indeed explore a completely new musical universe. Once this Covid-19 pandemic is finally behind us, we will all need to explore a new world of social interactions and working behaviors. Stay healthy in body and spirit!