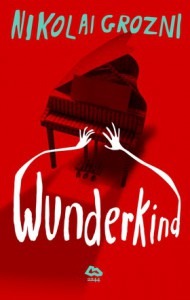 It is rare to find books written by someone who is both a trained writer and musician, but Wunderkind is a fine example of such a novel. Bulgarian writer Nikolai Grozni not only holds an MFA in creative writing from Brown University, but he also trained to become a concert pianist and later studied jazz and composition at Berklee College of Music. Writing and music were not his only interests either – in 1995, Grozni moved to India to study the Tibetan language and to learn about Buddhism, later becoming a monk at the Drepung Monastery where he stayed for six months. His five years in India inspired his three works in Bulgarian as well as his memoir in English, ‘Turtle Feet: The making and unmaking of a Buddhist monk’.

‘Wunderkind’ was inspired by the author’s own experiences as a student in a music conservatory in Bulgaria, and it portrays two different themes: a passion for music and the struggles of growing up under a communist regime.

Konstantin is a precocious fifteen-year-old pianist growing up in Sofia, Bulgaria, towards the end of the Cold War, in a society that sought to banish hopes and dreams and destroy honesty. Trapped within the confines of the Music School for the Gifted, he seeks refuge in his music, finding hopes and discovering revelations in each piano piece.

The writing is stellar, though some may find Grozni’s style a bit wordy. The author captured the worries of a music student aptly: ‘I was mapping the scherzo in my mind – noting all the ritardandos and accelerandos, the internal logic of the phrases, the accents that gave the fast passages a necessary punch, the lyrical out-of-rhythm moments, the places requiring superhuman precision…‘ and the sentiments of a musician most vividly: ‘I knew the feeling of becoming suddenly self-aware while playing in front of a large audience; the panic that seizes your mind and body when you realise that you’ve been playing a Chopin ballade for what seems like ages, and you’ve got to get through the coda.’

With each chapter named after a specific piano piece, Grozni’s musical examples are described beautifully and most captivatingly; for example, he likens the opening of Chopin’s Second Ballade in F major to ‘a distant bell with a silky, tempting ring that opened the doors to a spacious F major promenade… A minor, the key of twilight: ashen, lavender-tinted clouds gliding across a darkened sky washed in turmeric, the chestnut trees shuddering, awakened by the wind, and then that old question about the end; a why, a passing note stretching the distance between the two chords.‘

Ample scenes of smoking, drinking, and sex set in an atmosphere saturated with competitive and sexual tension make the setting – a school for gifted teenage musicians – feel rather real and convincing. More remarkable, however, was the way in which Grozni brought out the feeling of oppression amongst the students of the conservatory, who, by inherently being expressive and artistic individuals, were everything the regime did not want them to be. In a society that was ‘designed to turn humans into shadows, to erase the individual’ and in which ‘Obedience is excellence of the highest order!’, these young, passionate students, referred to simply as numbers – ‘Number Fourteen… you’ve earned your F’ – were able to find solace only in their music.