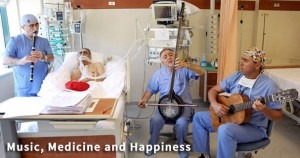 Doctors use music as medicine, Istanbul, Turkey – 05 Sep 2011…Manadatory Credit: Photo by Sipa Press / Rex Features (1432940A)
Dr Erol Can (center), playing a yayli tanbur (an Ottoman violin) with Professor Bingur Sonmez (left) holding a flute and Mehmet Susam (right) playing guitar
Doctors use music as medicine, Istanbul, Turkey – 05 Sep 2011
Doctors at a hospital in Istanbul are turning to an unusual form of medicine – music. Music therapy may sound a strange approach to modern medicine but according to doctors at the Memorial hospital in the Turkish capital it is producing results. The man behind the drive is Professor Bingur Sonmez and he has been joined by his colleagues Dr Erol Can and Mehmet Susam in order to revive the traditional Islamic idea of music therapy, a form of medical treatment that is almost 1,000 years old. They are convinced that, if used as a complementary therapy, ancient Arabesque scales and modes can have significant psychological and physiological effects on patients.