In Tune Arts
Music in the Clouds
Harps and Angels
by Georg Predota August 27th, 2014 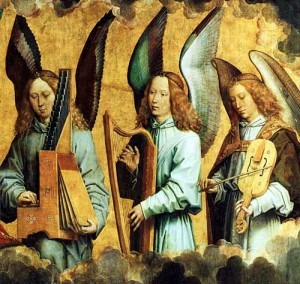 One of the most eagerly encoded images in a number of different cultures and contexts is the angel sitting on a cloud and playing the harp. What could be more comforting upon leaving this earthly realm than being greeted by a heavenly creature playing a bit of music? For one, “music is said to be the speech of angels” in the first place. And the soothing sounds of the harp are certainly capable of transporting the listener to an elevated state of consciousness. The association between angels and harps apparently originates in the Bible, more precisely in chapter 5 of Revelation. “Four angels, along with 24 elders, each hold a harp and a golden bowl full of incense to represent people’s prayers as they praise Jesus Christ.”

Greek mythology credits the god Apollo with the discovery of the lyre, a precursor of the harp. The story goes that Apollo brushed against a turtle shell on the ground and heard the sinews vibrate. “He then presented this new discovery to Zeus as an apology for stealing his cows.” The new instrument really achieved prominence in the hands of Orpheus, Apollo’s son. It was said, “his rich clear words and the silvery notes from his harps were so enchanting that they had magical effects on everything around him.” His songs could charm even rocks and rivers, with oak trees pulling up their roots to follow him down the mountainside. Most famously, of course, his playing softened the hearts of Hades and Persephone—the gods of the underworld—who allowed his wife Eurydice to return from the dead.

Angel musicians, frequently found in representations of Marian subjects, began to numerously appear in sacred art in the mid 13th century. Angel orchestras playing secular instruments adorned Marian altarpieces in imitation of mystery plays. These plays, portraying events in the life of Mary, became increasingly popular in the piazzas of Florence and elsewhere. Sponsored by confraternities celebrating the cult of Mary through music, vernacular song or instrumental music was interspersed with selections of texts or dialogues that lent themselves to dramatization. Representations of angel musicians in Marian altarpieces, as seen in paintings by Andrea di Cione and Giotto, among numerous others, are not realistic portrayals of contemporary liturgical practices. Rather, they seem to be taking their cues from biblical texts, most prominently Psalm 150. “Praise him with the sound of the trumpet, praise him with the psaltery and harp, praise him with the timbrel and dance, praise him with stringed instruments and organs, praise him upon the loud cymbals.”

The harp, however, is not exclusively tied to religious conventions. Mermaids, water nymphs and sea sirens have also been known to lure hapless travellers to their doom by playing the harp. And we all remember the Irish legend of Canola leaving the bed of her lover after an argument in the middle of the night. She heard beautiful music, and discovered the next day that the wind had created the music by blowing through partially rotted sinew still attached to a whale skeleton. The harp of Dagda, the Good God of the most ancient Celtic gods, was battle scarred and made of oak. Dagda always took his harp with him, even in battle. When his harp was captured in battle, he summoned the instrument with a chant. Immediately the old harp flew to his hand across the hall, killing nine men as it came. And let’s not forget the troubadour, a composer and performer during the High Middle Ages, who frequently accompanied his songs of chivalric and courtly love by playing the lyre. In more recent times, harps and angels have made a strong resurgence in esoteric realms and in popular culture. Personally, I don’t mind if angels sing songs of praise, play the trumpet, portative organ or viol, as long as they play the Mozart Concerto for Flute and Harp, K. 299 upon my arrival!