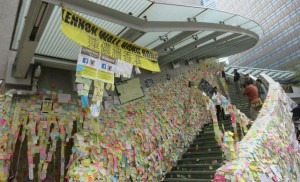 Before the last of the Occupy Movement protest sites were removed in Hong Kong, the city’s financial district was awash with brightly colored tents, yellow umbrellas and banners of all shapes and sizes. The most striking was possibly the Lennon Wall, a namesake of the one in Prague, where students and protesters have handwritten messages on multi-colored Post-it notes and stuck them onto the stretch of stairs that led to the government offices. On a nearby bridge hung a banner with the lyrics to John Lennon’s Imagine, now a popular peace anthem – “You may say I’m a dreamer but I’m not the only one”.

Music has always been in the forefront of social movements. With its ability to move people, songs have become an important vehicle for musicians and composers to express their political views and to inspire the masses. Hong Kong’s civil disobedience movement kicked off on September 28, 2014, when hundreds of thousands of people filled the streets, paralyzing Admiralty, Causeway Bay and Mongkok, in desperate calls for democracy and the freedom to choose the city’s next leader. Since that time, until the end of the occupation on December 15, 2014, a number of songs have sprung up, sung aloud at protest areas and recorded by local artists, to raise awareness and drive the movement forward. 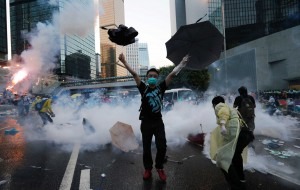 Apart from Lennon’s Imagine, the Umbrella Movement has adopted Boundless Oceans, Vast Skies by Beyond, one of Hong Kong’s greatest rock bands, as its unofficial anthem. The lyrics to the song, released in 1993, continue to resonate with the city’s pro-democracy protesters, who have met with a resolutely indifferent government, and some dissenting voices in the city.

“Many times I’ve faced the cold shoulder and ridicule/ Never have I given up my heart’s hopes and ideals.”

“Forgive my life of uninhibited love for freedom/ Although I’m afraid that someday I might fall/ Abandoning hopes and ideals/ Anyone can do it/ I’m not afraid that one day there will only be you and me.”

Another popular song is an adapted version of Do You Hear The People Sing from the musical Les Miserables. The plot of the Schonberg and Boublil musical revolves around a student-led protest in 19th century France who fight to give a voice to the poor and downtrodden. Unfortunately, in the musical (which was inspired by Victor Hugo’s novel), all the students end up dying defending the barricades. 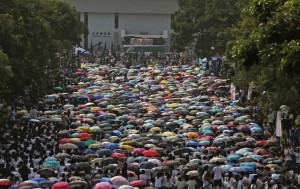 Protesters in Hong Kong identify with the song, partly because the movement is also led by students, but also partly because the students feel that the central government is not listening to the voice of the people, no matter how hard they try to get the message across.

Local artists in Hong Kong also teamed up to write ‘Raise the Umbrella’, in tribute to the incongruous tool students used to defend themselves when police launched tear gas to dissipate crowds on September 28.

Local singer Denise Ho, a long-time supporter of the students, formed “Hong Kong Shield’ along with other members of the cultural industry. She told the South China Morning Post that she really wanted to do something for the students, to give them inspiration after spending many nights at the protest sites.

“A young songwriter called Ah Pan sent me a song he wrote about the movement and his feelings about it,” she told the SCMP. After giving it a listen, she decided that it would be the perfect way to show protesters their support. In 48 hours, the song was recorded and complete, and it was well received by all pro-democracy supporters. 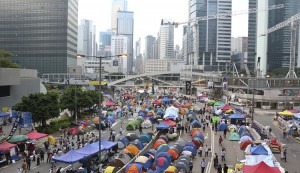 “Sitting among the crowds but we’re terrified/ Terrified at what might happen next/ But our lives have reached a tipping point/ Nothing is more terrifying than when silence prevails and words are not spoken.”

“Together we hold up an umbrella we hold our hands up/ Bravely fight for what should be ours/ Are you afraid?/ Whatever storm might beset us/ Our determination will not fade/ Umbrellas are like flowers/ They won’t wither or tear apart.”

There is power in music that makes a much stronger statement than a mere slogan or chant. Weeks later, these songs continue to resonate in people’s minds, and continue to fuel the movement even as the occupation part of it comes to a close.

Do You Hear the People Sing