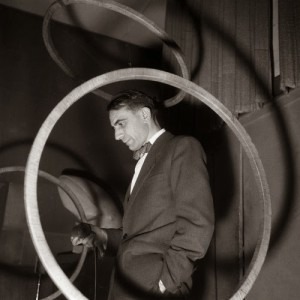 American painter Cy Twombly (1929-2011), a modernist with a strong calligraphic sense, moved from abstract art to ‘romantic symbolism.’ The titles of the works are the key to their interpretation – visually, you may be seeing shapes, forms, and words and he wants you to use all three elements to get to his meaning.

The primary sound inspiration in Henry’s work was the tearing of a piece of cloth, the veil. In his recording, Henry tore cloth to mark the moment when Orpheus lost Eurydice for the second time, when he turned back to see if she was actually following. The sound of the tearing cloth was transformed by Twombly into a painting of epic scale bearing the same title.

In his first essay on the theme, Twombly created Treatise on the Veil I (1968) 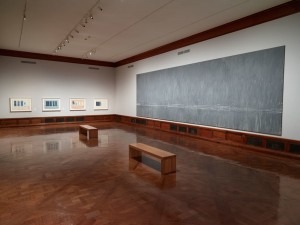 Twombly: Treatise on the Veil on exhibition at The Morgan Library

Twombly said that he had been struck by the very long sound of the tearing of a piece of cloth that opens Henry’s piece. To him, this seemingly unending sound materialized the concept of duration.

In changing the auditory inspiration into a visual work, Twombly “reduces his subject matter to its simplest parts, distilling and crystallizing its formal components so as to strengthen its visceral effects.” Although this work was created during Twombly’s “grey-ground period,” this first Treatise is on a dark, inky background. The use of the light paint heightens the contrasts between form and background. The work is enormous.

In his next work the same year, Veil of Orpheus, In The Veil of Orpheus (1968), he traced wax crayon lines over panels of painted canvas, creating what he referred to as “a timeline without time.” 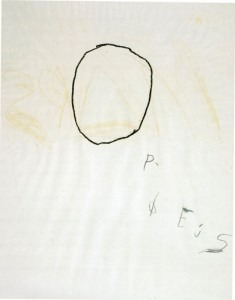 Twombly returned to the Orpheus idea in the late 1970s, inspired this time by a poem, Narcissus, written by Rainer Maria Wilke in 1913. In these large paintings, the name of Orpheus is written in Greek (Ορφέας), sometimes vertically and sometimes horizontally. 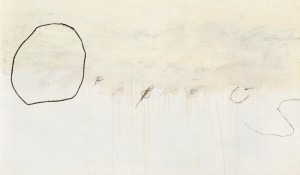 The original work by Henry is difficult to understand, and requires that one fully enter the sound world that he has created. You must imagine yourself as Orpheus, returning from the most dangerous place in the world, but not trusting that you have been given what was promised. In Twombly’s work, he seems to expand upon that very lack of knowledge – time passes but is the goal to be achieved?