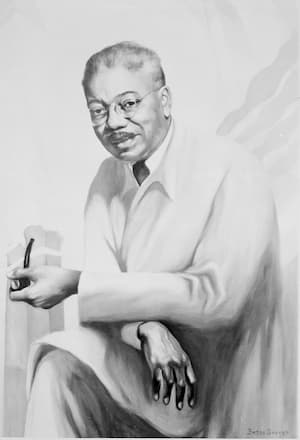 Aaron Douglas (1899-1979), was a leading painter in the Harlem Renaissance. In 1934, he created a 4-panel mural for the 135th Street branch of the New York Public Library. This branch later became NYPL’s Schomburg Center for Research in Black Culture. The mural was commissioned by the government’s Public Works of Art Project (PWAP). The PWAP, later succeeded by the Federal Art Project of the Works Progress Administration, gave work to artists for the Depression – some 15,600 works were produced by nearly 3,750 artists.

Douglas’ work shows the history of African Americans, starting from Africa and continuing through the 1920s. What’s of interest to us is how much music is part of the imagery. 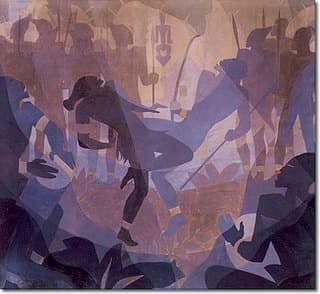 The first mural, The Negro in an African Setting, mixes several African styles, including an African carving in the centre and Egyptian-style profiles. The dance in the centre is probably less African than modern 1930s-style jitterbug. The drummers play traditional African drums, which when found in the American South in the hands of slaves, were destroyed. This very much is an image of what was lost when the African nation was enslaved: the ruling nobility, the freedom of expression, and the freedom of art.

In the second mural, An Idyll of the Deep South, at the centre are a guitarist and a banjo player and pushed to the edges are the work tools, the work actions, and the despair.

After the Civil War in the US, the period of post-war Reconstruction (post-1865) was a time of great change – while on the left are the threatening and repressive figures of the Klu Klux Klan in the background, and a representation of sharecropping and the cotton harvest at the front, on the right side is rejoicing, with arms upraised, accompanied by a trumpeter and a dancer, representing the new freedoms. On the hill behind are the symbols of the north – apartment houses and the US capital. 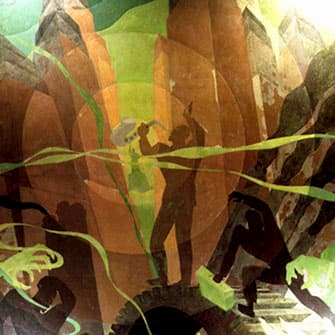 The last mural, Song of the Towers, again puts music, in the form of a saxophone, at centre. In the background is the Statue of Liberty, carrying its own symbolism. Ghostly hands (one writer says that these represent the clutch of serfdom) grab one unfortunate on the left, while on the right, another escapes, suitcase in hand. The saxophonist, standing on the modern wheel of life, gestures to the symbols of freedom with his own creativity in his hand.


The murals, highly symbolic, will be re-read by each new generation. The use of the circles in each mural, focusing on the most important aspect, pushes music to centre. Placing music in each image, however, shows life’s grounding and need for the arts.