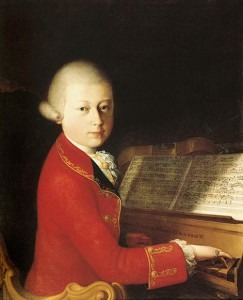 Around the 5th century BC, a Celtic tribe established a small settlement on the banks of the river Salzach. By 15 BC the settlement had grown into the city Juvavum, and was part of the Roman Empire. The modern name of this city, Salzburg (Salt Castle) emerged with the construction of a citadel in 1077. This fortification enforced and regulated the collection of tolls and taxes from barges ferrying salt from the northern part of the Alps to Italy. And it was this trade in salt that made Salzburg a very wealthy city. Actually, the city wasn’t wealthy at all, as most revenues flowed into the pockets of a handful of extended families. These families, in turn, arrogantly controlled and dominated virtually all aspects of civic and ecclesiastical life; some critical observers suggest that they still do! Be that as it may, the ruling elite had no interest in letting anything as mundane as a gifted composer by the name of Wolfgang Amadeus Mozart interfere with the conservative practices and mechanisms that assured even higher profits. No wonder that Wolfi hated his hometown — which by the way was part of the kingdom of Bavaria at that time — and actively strove to leave the repressive and small-minded confines of his upbringing. In May 1781, Wolfgang Amadeus Mozart approached Count Karl Joseph Felix Arco — the chief chamberlain, counselor of war, and grand master of the kitchens to Hieronymus von Colloredo — to deliver his formal resignation. Arco refused Mozart’s request prompting the composer to frequently return with additional petitions and memoranda. On June 8, Arco finally lost his patience and delivered a swift kick to Mozart’s backside that unceremoniously ended his employment in Salzburg. How ironic that the Salzburg of today — although not entirely unexpected — has completely rewritten history and continues to reap the financial rewards of a relationship that never existed!

Growing up in the city of Salzburg, Mozart became best friends with Johann Michael Haydn — younger brother of Joseph Haydn — and he greatly admired his music. Not surprising, really, as Haydn and Mozart shared the organist position at the Dreifaltigkeitskirche (Trinity Church) in Salzburg. Michael Haydn taught Carl Maria von Weber and Anton Diabelli and composed significant sacred choral works, roughly 40 symphonies and various chamber compositions. Michael Haydn also famously composed for unusual combinations of solo instruments, in this case, a concerto for organ, viola and strings. Mozart himself might have performed this very composition, and throughout his own compositional career fashioned concertos for a variety of instrumental combinations, including the phenomenal concerto for flute and harp. 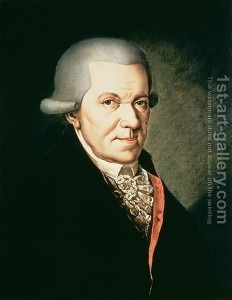 Taking violin lessons from his father, Wolfgang demonstrated exceptional talent, and he quickly became a highly accomplished performer. Leopold wrote to his son in 1777: “You have no idea how well you play the violin. If only you would do yourself justice and play with boldness, spirit and fire, as if you were the greatest violinist in Europe!” During the course of his violin studies, Leopold also introduced his son to the “Church Sonatas” of Francesco Turini. This musical genre originated in northern Italian churches in the 17th century, but quickly made their way into Austria. Performed within a liturgical context, these short instrumental works sounded between the reading of the Epistle and the Gospel, and accompanied the priest solemnly moving from the southern part of the church to the Nave. During his tenure at Salzburg Cathedral, Wolfgang Amadeus Mozart composed a total of 17 so-called “Epistle Sonatas.” Predominantly scored for strings and organ — functioning either as solo instrument or as continuo — the small organs in the galleries actually inspired the style and form of these compositions.

Francesco Turini: Sonata Seconda a due Violini and Basso

The Benedictine University of Salzburg cultivated spoken pedagogical plays that developed into an opera-like art form. Commonly referred to as School Dramas, these works consisted of a succession of recitatives and arias intoning Latin poetry, with the stage machinery based on Italian opera. Anton Cajetan Adlgasser, student of Johann Ernst Eberlin and organist at Salzburg Cathedral, collaborated with Wolfgang Amadeus Mozart and Michael Haydn on the sacred musical play Die Schuldigkeit des ersten Gebots (The Obligation of the First Commandment), in 1767. The 11-year old Mozart composed the first part, with the second and third parts contributed by Michael Haydn and Anton Adlgasser respectively. Regrettably, Haydn’s and Adlgasser’s contributions to this drama have not survived. Nevertheless, we do have ample surviving testimony of Adlgasser’s musical facility.

Next time, we will conclude our investigation into the musical relationship between Salzburg and Wolfgang Amadeus Mozart by taking a closer look at the influences that shaped his early dramatic works. We will also sample Wolfi’s emerging symphonic conception, squarely based on the Divertimenti compositions of Joseph Haydn.