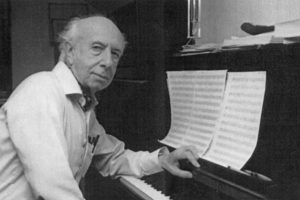 Morton Gould (1913-1996) was never afraid to mingle popular and classical styles. Equally at home with a symphony orchestra, musical comedy, film music, jazz and popular music, musical eclecticism became a hallmark of his compositional style. He once said, “I have always been and still am stimulated by the vernacular, by the sound of spirituals, jazz and the like. Although I might venture into more complicated abstractions, there is always present in one form or another at least the residue of those elements.” The New York Times obituary suggests that “Gould’s music matched his lifestyle: rhythmically profuse, filled with dynamic energy, and not afraid to incorporate American culture even in its most blaring forms.” He certainly knew how to create a fusion of important American musical styles, and in his Six Pieces of China Gould garnished imaginary snap shots of China with a touch of jazz. 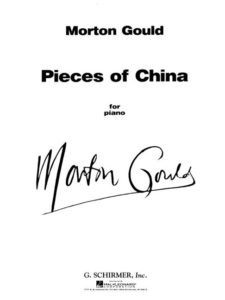 Composed in 1985, Gould’s Pieces of China have been described as “a kind of Pictures at an Exhibition for the Kodak age. The idiom is a hybrid of borrowings from popular music styles and the Western composer’s ‘do-it-yourself Chinese music fake book,’ but it’s an absolutely charming condensation of cliché and postcard images.” “The Great Wall” takes the listener on an imagined ceremonial stroll along the Great Wall, while the impressionist “Fable” is headed by a chameleon-like pentatonic motif. With its blue note inflections “China Blue” might be heard in any number of New York cocktail bars. “Puppets” and the “Slow Dance Lotus” exhibit Gould’s love for jazzy rhythms, and the concluding “China Chips” presents a pastiche of popular tunes clothed in percussive rhythms. Altogether, it is not a reality based musical view of China but a charming blend of imagination and idiomatic characterizations.