Artists Behind the scenes
What Happens When It All Goes Wrong?
by Maureen Buja October 24th, 2014 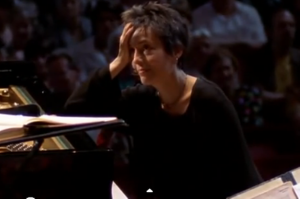 It’s the classic quandary for musicians – you’re playing and then all of a sudden something absolutely terrible happens. It may be any number of things – someone gets lost at a critical point in the music, you turn two pages of your part at once and make the wrong sound at the wrong time, or whatever haunts your performance imagination.

I was at a concert last night where the first violinist in the string quartet lost his music right in the middle of the second movement. It was on his stand and then, whump, it was on the floor. Up to that point, it had been a competent performance and then, all of a sudden, all the cracks showed. The quartet did their best and finished the movement but there was clearly something wrong. The nervous looks between the performers were as much a signal of this as the problems with the sound. Even the audience started looking nervously at each other. The problem for the quartet was that the concert was being recorded for broadcast (luckily not live broadcast!). Should they stop or go on? They found a unique answer to their problem by addressing it in the encore – they quietly announced that they’d had a problem in the second movement and would be playing it again. And they did so to tremendous applause.

I’ve been to concerts where the ensemble got so screwed up that the conductor stopped the performance, got everyone back to a common starting place, and began again – this was a high school band concert, so it was to the relief of both the band and the anxious parents that the problem was addressed.

I’ve been to concerts where you wished the conductor had stopped it all and started it again. Or, perhaps, just stopped what was going on and went on to the next piece.

I was conducting an outdoor concert as a guest conductor for 1 piece when, whoosh, all of a sudden, my entire score was whisked away by the wind, leaving me only with the final page. I soldiered on, trying desperately to remember the cueing, and hoping I didn’t forget any of the time signature changes. It ended successfully, but not nearly soon enough for me. I was quite happy that my back was to the audience!

Often these problems in performance come from unforeseen catastrophes, but, all too often, are indicative of poor rehearsal, not enough rehearsal, or a conductor who is more confident of his material than his ensemble. Afterward, everyone concerned vows this situation will never never never happen again. Or, at least, not to them.

It’s the fear of a performer – to have it all go wrong in public, but for the audience, it’s often an interesting reflection on the difficulties of performance, the problems that you rarely see, and of the wonderful presence and savoir-faire of a performer in recovering from a potential debacle.